Trending Now
You are at:Home»Featured»Obama: From Truman’s Whistle-Stop to Wilsonian Folly
By Dr. Marvin Folkertsma on August 22, 2011 Featured, Government & Politics 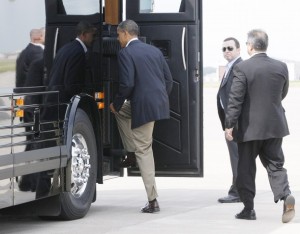 President Obama’s tour through the Midwest in a coal-black Darth Vader-mobile begs comparison with past presidential excursions. I’m thinking of those made by presidents Harry Truman and Woodrow Wilson.

First, the president repeated his Trumanesque mantra about his version of a “do-nothing Congress,” dominated by a minority who put the good of the party above the good of the country. That is a serious charge, though few in the press called him out. Second, President Obama hurled a critique at the auto industry and presumably those who purchase its products: “You can’t just make money on SUVs and trucks. There is a place for SUVs and trucks, but as gas prices keep on going up, you have got to understand the market.” This is one of the most breathtakingly puerile statements ever made by an American president, especially one who has not the faintest idea of how industries and markets function in a free society.

Somehow, the expression, “Give ‘em hell, Barack!” doesn’t seem to fit a mission whose admirers yearn to be likened to Truman’s famous whistle-stop tour in 1948. And what about the comparison?

Among the differences between the Truman and Obama treks is the timing. Truman traveled around the country in a train during the year of the election itself, a few months prior to the November vote, while Obama’s tour occupies a few days in August a whole year before voters decide in 2012. More than that, the president seems to prefer to ogle the polls and urge citizens to pressure Congress into a more White-House compliant mood. Contrast this to President Truman on this subject: “What would Jesus Christ have preached if he had taken a poll in the land of Israel? It isn’t [polls]that count. It is right and wrong, and leadership.”

There is, however, another president and presidential tour to which Obama and his Midwest excursion bear some resemblance: President Wilson and his train ride through America to garner support for his beloved League of Nations. Temperamentally, the two men share some characteristics, especially in their narcissism. Wilson once pondered his superiority to Jesus Christ in settling differences among nations, in that humanity’s Savior did not have a plan, whereas he, Woodrow Wilson did. Wilson believed that the voters didn’t put him in his position of authority; God did, and it was to Him only that the president was responsible. Similarly, President Obama’s self-regard is hardly a well-kept secret, especially in light of his belief that he and those who support him constitute “the change we’ve been waiting for.” In both cases, we find men who regard themselves as specially gifted and chosen to carry out great deeds.

In Woodrow Wilson’s case, the great deed was nothing less than effecting a fundamental transformation of world politics centered on a newly constructed, global, collective-security system to replace the system of international relations that had been in existence since the time of the ancient Greeks. For Barack Obama, the “change you can believe in” entails the transformation of the United States from an opportunity society based on merit and markets to a social democracy that focuses on redistribution and political dominance of civil society. Compromise was anathema to Wilson and is repulsive to Obama when it comes to programs dear to the heart of each: the League for Wilson, healthcare for Obama; neither budged an inch over the basic assumptions underlying these massive enterprises, and, ironically, both bold enterprises have constitutional problems.

And both presidents tended to blame others for their problems—for Wilson, it was the Republicans in Congress, and for Obama, everything from poor weather to high oil prices, jittery Europeans, and, of course, Republicans in Congress. Both encountered cheering audiences and enough press adulation to make a Soviet Commissar blush; and both failed, in Wilson’s case spectacularly, and in President Obama’s case, more in a fizzle as his mammoth coach sputtered the last of its greenhouse gases on the return journey.

These considerations finally lead to the question that has lingered about President Obama since his election, and that is to which of America’s notable chief executives he bears the closest political resemblance. Admirers of the president, including himself, often cite Franklin Roosevelt or Abraham Lincoln, and perhaps John F. Kennedy in his most articulate pose. Detractors point most often to Jimmy Carter or Herbert Hoover. However, the next face Obama sees in the mirror from all those ghosts of presidents past might be one that so far few have mentioned, but perhaps is the most relevant of all, given his grandiose political ambitions and crushing failure—the stricken, sickly, and defeated face of Obama’s fellow progressive: Woodrow Wilson.