Trending Now
You are at:Home»Columnists»Sandy – or the Making of a Pearl
By Mary Biever on November 17, 2011 Columnists, Featured, On Books 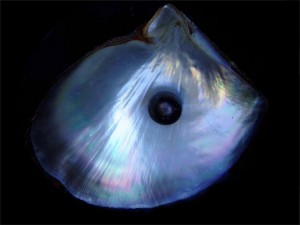 When I was in 4th grade, I wrote my first short story. My teacher was the first in my school who wanted to try a “creative classroom.” After we finished our assigned work, she had stations we could go to with extra projects. One included story starts. I took one of the cards and wrote a story, illustrating and writing it many times over that year.

It was the diary of a grain of sand who enjoys ocean life until the day he is snagged by an oyster. Inside the oyster, “Sandy” goes through excruciating tortures. Layer upon layer is added onto him, and he cannot understand what is happening. He wonders if the suffering would continue forever or ever end. Finally, one day it does end but he still never understood what had happened and missed his life on the bottom of the ocean.

Later, the oyster is captured, and he is taken from it. He had become a pearl that was beautiful. All the pain and suffering was part of the process that made him who he had become. It was worth it.

I wrote and rewrote that story for 3 years, never realizing the story I was writing was my own. The only copies of the story that remain are in my head and heart.

To put the story I wrote in context, when I wrote it, my father was a missing fugitive whose name was in area news headlines.  I lost a piece of my childhood at a time that year, ventured to Louisiana the next, and spent the rest of my childhood fighting with my mother and siblings to survive after we lost everything we thought we owned.

I was the grain of sand under horrible pressures. It took a lifetime to realize that’s how God refined me. The rest of the story is in my new book, He Uses It For Good.

Now I see that the moments you feel the most like there are too many pressures, sorrows, and struggles are probably the ones where God is working hardest to use those experiences to help you become something better.