Trending Now
You are at:Home»Columnists»What We’ve Got
By Jake Frost on May 31, 2011 Columnists, Featured, Men 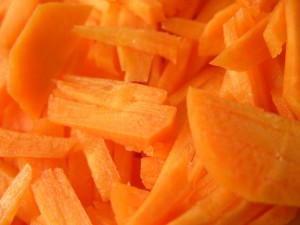 Sometimes I marvel at the creative power of the human mind.  Like whoever first thought of grabbing the wind out of the sky and putting it to work for us.  Someone, somewhere long ago, needed more grain milled.  What to do?  Get more serfs, hire more hands, harness more horses.  But what if you don’t have serfs or money or horses?  “Well,” the unknown but audacious innovator thought, “the wind is free for the taking.  I’ll use that.”  Propeller-powered electric-turbines and the TVA weren’t far behind.

I had a similar eureka moment, albeit on a much smaller, more prosaic scale, with our eighteen month old daughter.  Liz was helping me make veggie soup, and you know how little helpers can slow down the process.  First she stood on her stool at the sink and we washed carrots together (each clean carrot yielding about a gallon of water on the kitchen floor).  Next we moved her stool over to the chopping station.  There an elaborate ritual developed for getting carrots from the cutting board into the soup.  Daddy cut a piece of carrot and then placed the piece on the counter in front of Liz so she could “dump” it in the pot.  Every time I handed her a carrot piece, Liz said “Thank you”.  I said, “You’re welcome,” and then she said “Dump!” and dropped the carrot segment into the pot.  With one piece successfully delivered, it was time to repeat the entire process with one more tiny, individual piece of carrot – every step observed with the care of a ceremonial tea from the ancient Orient.

The thing with ceremonial teas from Medieval Asia is they take a lot of time.  So I started singing to help while away the idle moments between my produce handling duties, selecting a classic from the oeuvre of timeless vocal-music:  The ABC Song, to be precise.  Liz bopped her head and danced along to the lilting strains of “A-B-C . . .” as we slowly filled our pot.  But despite its status as a lyrical masterwork, we had five carrots to work our way through, and Daddy began to tire of the alphabet song after 10 or 15 renditions.

I stopped singing and said, “Well, let’s see now, what next.”

Liz smiled and went back to be-bopping on her stool.  “Dump!” she declared, and another piece of carrot plopped into the pot.

I smiled, too.  First to have my singing called “music.”  But second, at the realization that a smile and a happy afternoon for our daughter was free for the asking.  It didn’t take dolls whose clothes cost more than mine, or play-structures you needed a building permit to erect.  A little joy for Liz was as free as a song.

Sometimes we parents fall into the trap of worrying about all the things we can’t give our children — from toys when they’re little to cars and college tuition when they’re bigger.  We forget that you make a life out of what you have, not what you lack, and overlook the things right under our noses that we can use to create a good life for our kids and ourselves – like playhouses made from cardboard boxes, or a song and some dirty carrots and a pot of soup.

In the Acts of the Apostles, as Peter and John when into the temple, a crippled beggar asked them for alms.  Peter answered:  “I have neither silver nor gold, but what I do have I give you:  in the name of Jesus Christ the Nazorean, rise and walk.”  Peter took the man by his hand and raised him up, and the man was cured and walked into the temple with them.  Acts 3, 6-8.

That’s what we can do as parents:  give what we have.  And sometimes we are all like the crippled beggar, outside the temple looking to gold and silver and things of this world for our cure.  But the things that can heal us, the things that really matter, are from God.  Things like truth, faith, joy, courage, peace.  The things that can’t be bought.  Instead of focusing on what we don’t have, if we take stock of the gifts already given us, and the things available to us without a price tag, we may be surprised at the resources we can draw upon, and all that we can do with them.  Like the audacious innovator who first grabbed wind out of the sky, we can take hold of the graces offered us to transform our world, starting with our own families.  Then we too may be healed, rise, and enter into the temple.