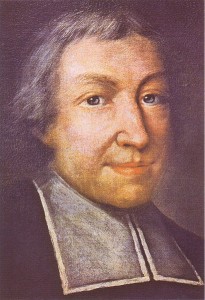 The great saint, who feast is celebrated today was born at Theims, France, on the 30th of April, 1651.  His parents were very careful about his early training, and insisted that their son should receive a thorough education, and that the moral side of his schooling command the utmost attention.

Perceiving that his vocation was to serve God in the church, the young man prepared himself accordingly, and was ordained to the priesthood on the 9th of April, 1678. His life as a priest of God was holy and exemplary in every particular duty that his vocation imposed upon him.

His preeminent work in this world was the establishment of the Institute of the Brothers of the Christian Schools, for the purpose of giving a Christian education to the youth of the land, and uniting the members of the community under a religious rule, the observance of which would make them true followers of Christ.  Like other religious communities established by saintly men for the greater honor and glory of God in the world, this particular one has been blessed by God in a special manner, so that in our time the Brothers of the community are thousands in number and the multitude of young men they have prepared for their life’s work are an honor to their country, their Church, and their Creator.

Reflection.  Let those who have the care of the young remember that they will be held responsible by God for the education they give to the children which he has given them.  Let them learn from the life of St. John Baptist de la Salle not to neglect the most important part of children’s training, for: “This is eternal life, that they may know Thee the only true God and Jesus Christ whom Thou hast sent (John 17:3).