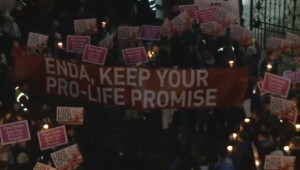 Over 10,000 gathered outside Ireland’s parliament this week to demand that Prime Minister Enda Kenny keep his campaign promise of 2011 not to bring legalized abortion into the Republic. The crowd included five Catholic bishops, and was organized by a united effort of all of Ireland’s pro-life organizations.

The thousands, chanting “Keep your promise!”, packed Molesworth Street in central Dublin, holding placards urging the government to protect both mother and baby. The crowd was addressed by Niamh Ui Bhrian and Dr. Sean O’Domhnaill of the Life Institute, and Caroline Simons of the Pro-Life Campaign, who said that the politicians would face a massive public backlash if they attempted to overturn the country’s constitutional protections for the unborn.

After several weeks of misinformation in the mainstream media over the death of Savita Halappanavar, Ui Bhrian said, “Clarity is now coming back to the debate following the hysteria whipped up by abortion campaigners after Savita’s tragic death.”

“The pro-life majority will want to ensure that Fine Gael does not move to legislate on the X case.”

Pro-Life Campaign legal adviser, Caroline Simons, said, “The way in which the debate is being stage-managed and railroaded through the Dail is deeply disturbing and undemocratic.”

“Women deserve better than this. So do unborn babies,” she added. The rally, she said, sent a message that “there is nothing liberal or compassionate about abortion.”

The Life Institute is preparing to follow the rally with a massive, nationwide campaign that includes getting 1.4 million leaflets into every household in the country warning that Kenny and the Coalition are preparing to “open the door” to abortion on demand, and that promises of “limitations” are nonsense. 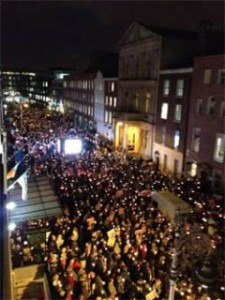 The rally was held in response to threats by the coalition government to bring forward legislation to allow abortion. Since the ruling in 2010 by the European Court of Human Rights on the A,B& C case, Irish politicians are said to have been in a state of chaos over abortion, with pressure from the global abortion lobby on one side, particularly at the European Union, and a public that opposes liberalization of the law on the other. Although the ECHR ruling specifically said that the country is not under an obligation to legalize abortion, this has not stopped abortion lobbyists in the Dail, largely from Labour Party coalition partners, from insisting that the government legislate to allow abortion in “limited” circumstances. The media’s treatment of the death of Savita Halappanavar has only increased the pressure, leading to promises to bring in legislation before Christmas.

In the Dail, James Reilly, Minister for Health, spoke of the coalition’s “firm commitment to implement the judgment of the European Court of Human Rights in the A, B and C v Ireland case and bring the required legal clarity to the issue of lawful abortion in Ireland.”

But, he said “that does not mean abortion on demand.” “We must protect the life of the pregnant mother and yet vindicate the right of the unborn child.”

Simons and other pro-life leaders are adamant, however, that the government’s promises of “limited” abortion are meaningless. “Once the principle is conceded that every human life has an inherent unrepeatable value, there is no going back. What has happened in other countries proves that there is no such thing as restrictive abortion,” Simons said.

“In Britain, abortion was introduced on narrow grounds, but is now legal up to birth. Babies who survive the abortion procedure and can breathe unaided are simply left to die. Just last week it was reported in Canada that 491 babies who survived abortion between 2000 and 2009 were left in a corner to die after receiving no medical care or attention.

“That is the true barbaric picture of legalised abortion,” she said.

Niamh Ui Bhrian told LSN that the rally was just the start of a campaign to reverse the work of the media propagandists. “For the last three weeks people have had this non-stop propaganda,” saying that the pro-life laws threaten women’s lives, that they need legalised abortion to be safe. This, she said, is “absurd” given the rating of Ireland by the World Health Organisation as number two in the world for maternal health with those laws in place.

Pro-life people are fed up with the propaganda, she said, “they needed to come out in massive numbers and tell the government to keep their promise.

“They said, ‘Don’t you dare rush this through before Christmas’. It’s the people who are sovereign, the people who make the decision, not the European court and not the abortion lobbying media.”

“And getting ten thousand on a Tuesday afternoon in December is going to send a message,” she added. “Traffic was stopped and the streets were filled.” Politicians are in a state of panic, she said, and are “speaking out of both sides of their mouths.”

“What the pro-life movement needs to do is make the government realise that once people know that all the pro abortion hysteria isn’t true they are going to be clamouring against any threat to Ireland’s pro-life laws.”

The government is “rushing to get make a decision to abortion before Christmas to take advantage of the hysteria and confusion raised by the media’s duplicitous and manipulative coverage of the Savita case.”
To send a message to Prime Minister Enda Kenny
Taoiseach’s Private Office
e-mail:taoiseach@taoiseach.gov.ie
Phone: 01-6194020 / 4021 / 4043
Fax:    01-6764048

To send a message to Justice Minister Alan Shatter
alan.shatter@oireachtas.ie