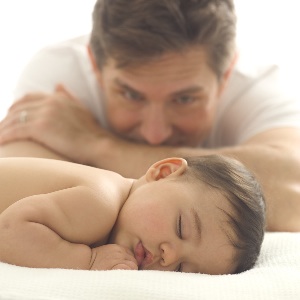 In a recent talk during this 40 Days for Life campaign, I mentioned that the pro-life movement is made up of sinners.

We are all sinners and the pro-life effort includes many who have had abortions, doctors who have done abortions and thousands who at one point sincerely defended abortion but are now pro-life.

Many know the pain of abortion — including men.

After my talk, a man with passion in his face and tears in his eyes shook my hand and shared how his past sin of abortion is still deep in his heart.

Men can play a large role in an abortion. They can abandon women when they hear they’re pregnant. They can encourage — and many times pay for — the abortion. Their mistakes are real, but so is their pain.

Other fathers are told they have no rights, no voice and they can do nothing to stop an abortion. And that, too, can hurt deeply.

Volunteers prayed as three young people walked into the abortion center – a young man and his girlfriend, plus another female friend whom they described as verbally abusive. A short time later, the young man walked out of the building, sat on the steps – and stared at the signs the prayer volunteers were holding.

Before long, he told his story. His girlfriend was pregnant. She already has a child and wants an abortion — a decision her friend strongly supports.

The volunteers showed him fetal models, and he was totally shocked at the level of development of a 12-week baby. He said his girlfriend promised she would not abort if she was past 14 weeks, but she and her friend were quite angry with him for not supporting the abortion.

The friend then got in her car and took off, leaving the young man stranded at the abortion center. One of the vigil participants asked if the angry friend had previously had an abortion. “How did you know?” he asked. To those familiar with post-abortion pain, it seemed a reasonable suspicion.

He went inside once again where he learned that his girlfriend was nine weeks pregnant and going ahead with the abortion.

He came back out, “fell to his knees and dropped his cell phone and cigarette and cried so many tears that they wet the sidewalk,” the volunteer said. He kept repeating, “It’s my baby, too!”

The young man was offered emotional support and guidance, financial assistance – even a ride back home. “Please pray,” said the volunteer, “that God would somehow turn this tragedy into repentance and a future that would glorify His name.”

Vigil participants often see a man walking his dog on the sidewalk near the vigil. One day, one of the volunteers simply said, “Good morning!”

The man walked down the street a bit, but then turned around and walked over. “I want to tell you something,” he said. “I know that I’m responsible for three of them” – abortions – “and your sign that says ‘men regret lost fatherhood’ is exactly right. I do regret it and I want you to know I support what you’re doing here.”

Another volunteer said all it took was a smile to get the attention of a woman walking towards the abortion facility. She walked over to the vigil participant, who was standing next to a display that said “free pregnancy tests and free ultrasounds.”

The woman said she was coming for a pregnancy test. “I heard Planned Parenthood was the place to go,” she said, adding that if she was in fact pregnant, she wanted her baby.