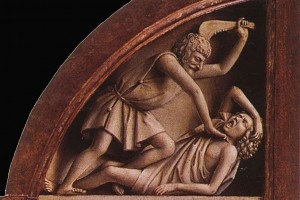 By the time Cain and Abel show up in creation history, Satan had already inserted himself into human affairs and the fall of man. Adam and Eve were now living in a not so happy story of life without the garden, “toiling and suffering” in the outside world. The big lesson to be learned by all of mankind was that disobedience equals punishment. God gave us a free will but made a compelling argument for exercising discernment by creating consequences for our decisions.

There was, of course, another lesson to be learned in the course of man’s epic adventure; a lesson that is still being dissected: Does man obey God out of fear because God has the ultimate power and owns the end game; or is obedience rooted in love of God and our need for forgiveness? Satan convinced Eve to question the original intent of life with God. He creates for us, and for all time, a question about all things and the motive behind them. In an instant, we stopped being sure about God, about life, our purpose, other people or anything we encounter. Our confidence was shook; our conscience was on high alert and cynicism was born into the world. Motive and opportunity would remain profoundly at the core of any continued existence.

When Cain and Abel come on the scene, there are competing dynamics at work: On one hand, God was reshaping His plan and making long term arrangements for man’s return from his banishment. He wanted man to find Him and love Him again so He could bring man to Paradise. On the other hand, man was still deciding if the plan was good, questioning God’s intent and discerning the nature of God’s desire for love.  For all time, man would wander in the wilderness of thought trying to answer Godly questions with manly reasoning.  Satan had done his job.  He had confused us all; a confusion that continues until today.

It is with Cain and Abel that our destiny was divided. In Genesis 4:6, the Lord said to Cain: “if you do well, you can hold up your head; but if not, sin is a demon lurking at the door: his urge is toward you, yet you can be his master.” God clearly reassures man that he was destined to be “like” God as a co heir of life eternal and co administrator of His power.  He gives man a chance to clear his senses and renew his vision of God. Cain decided poorly and slew Abel thus becoming a slave to sin, mastered by Satan and “a restless wanderer on the earth.”

Cain becomes the ultimate symbol of man’s confused state of mind as a consequence of sin. Adam unwittingly plunged us into sin and its due punishment; a punishment that had its limits and that would allow us to be redeemed. But Cain, by his actions, slew all mankind and brought us into judgment before God from whence punishment could potentially never find redemption. He turned the small “s” in sin into a capital “S” and mortally wounded us in a way even Adam could not imagine. Adam’s sin was based entirely on his inexperience in dealing with temptation but Cain had time to contemplate, conspire and act on the sensations of envy and jealousy. As a result, Cain brought us death personified initiating the first mortal sin.

Abel is the symbolic man returning to God’s garden—his Kingdom—our Paradise. If Adam had been the first man to live in sin, Abel became the first to die in obedience. Abel led the way back and demonstrated a way for us all to be “able” to return to God. Abel, fortunately, died while demonstrating his desire to please God. He is perhaps the first saint martyred for his conviction. His lesson was that we must die to ourselves in order to master evil and receive God. The emphasis is on the word ‘receive.’ God has never left us. He is still in the garden with His finger waving us toward Him and His gift of life—the tree of life—Christ on the Cross—waiting to be received by us.

So it is that our destinies are manifested among the righteous or the condemned.  Each of us is cousin to the first prodigies of Adam’s fall. We all have within us a ‘Cain’ nature and an ‘Abel’ nature. Our will eventually leads us to a decision to become masters or slaves. Every single thought we have leads us to decide whether we shall offer our will to God or rebuke Him in favor of manmade motives.  Our ‘Cain’ nature is like a giant ice breaking ship, slogging through the ice sheet, cracking and shoving at the cold hard nonsense of man’s world, mastered by Satan and making way for selfish desires and ambitions, all the while losing sight of the horizon. Our ‘Abel’ nature feels the tug of an umbilical relationship with our God creator, unseen but surely felt. The Abel perspective recognizes that we are small and God is big; we must pay homage to win back our place with God so He can fulfill His plan to save us.

We have two natures joined in a single soul counterbalancing the effects of the other. As Cain, we are troubled persons trying to find our way in a fallen world lacking confidence because of sin, lacking knowledge because the fruit from the forbidden tree, in the end, yielded no explanations, and we continue to lack the proper discernment needed to avoid the tempter. Our ‘Cain’ nature is evident in nearly all aspects of life battling, convincingly against a meek ‘Abel’ personality barely noticed among the rubble of a secular society. Rarely do we attend church. Rarely do we spontaneously pray. Rarely do we notice the intentions of God through the mist of daily mundane activities. Every day scientist grow closer to convincing us that God does not exist. And every day more of our friends leap over the cliff with the other lemmings offering up burnt vegetables to false gods.

The Most evident impact of Cain’s sin is in our youth. So often, they are presented with a decision to offer up to God the right sacrifice and they choose, rather, their own poor offering of imperfection, hedonism, group thought, sexual expression and natural earthly instincts toward self gratification. The generational gap has given way to a complete separation from our parents and any sense of tradition. Those who are resolute and God fearing are chastised and slaughtered with verbal malice. Cain has made us  put manmade initiatives first, exploiting our desire for sports, food, sex, gambling, and pleasure ahead of family, fidelity, church, prayer, fellow persons and sacrifice.

Little do we notice the affect: we have all been banished from the garden, living on the lam as “restless wanderers” on the earth condemned by our imperfect burnt offerings, which will never produce the ultimate fulfilling substance of life within us. We must awaken our ‘Abel’ nature from which an abundant life may rise up from good sacrifices—emphasis on sacrifice. We must offer our lives to God through Christ crucified and become perfect sacrificial lambs exclaiming “here I am Lord. I have come to do your will.” That is the way in which God perfects us, readies us for our march through the narrow gate. We must slaughter our own wills, allow obedience to become an act of love and recognize the short time we have been given to make it so. “To him, that overcometh, I will give to eat of the tree of life, which is in the paradise of my God (revelation 2:7).