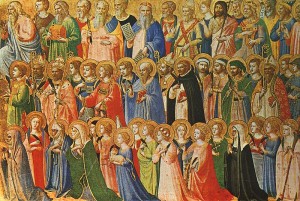 To the 498 Spanish martyrs of the 1930s and all those who suffered religious persecution during the 20th century.

The militia men shoved him out of his house, ready to make him the 499th martyr for some future beatification. Don Bartolomé let himself be pushed along, knowing that he had few hopes. Just the same as always. When he discovered that the leader of the so-called Death Squadron was Manolito–the kid from las Tejas–he thought maybe all was not lost. He had been Manolito’s teacher in the town’s school and he knew well that the boy’s brute force was matched only by his pride.

“Name’s Blood, don Bartolomé–and just so you know, I’m not don Manuel, only ‘cause dons don’t matter a damn any more.”

“Well, don Blood, you wouldn’t be thinking to kill me, the priest, and the poor nuns of la Encarnación just like that, without convincing us that we’re dying for Freedom and the Revolution, would you?”

“I was thinking ‘don’t put off ’till tomorrow what you can do today,’ just like you taught us. The boys are really set on taking you out. The pharmacist and the mayor slipped past us, the damn maricones!”

“But, Manolo, hombre, remember that you are a bunch of” (he paused, looking around him, as if he were lecturing in class) “rational animals and you can’t just kill us like that. You have to get us victims to agree with you, to make us happy to go on your ‘little walk,’ to heartily thank you for your revolutionary endeavors.”

“You I’m sure I could convince, but not the priest who is so closed-minded. Nor the nuns who . . . who don’t even look me in the face.”

“Then it’s a deal, Blood: if you convince me you can kill the lot of us,” and he held out his hand.

After that first night in July, Manolo (a.k.a. Blood) and don Bartolomé the school teacher discussed political philosophy before the impatient militia men’s shotguns and the hypersensitive ears of the local cleric. Blood started off like a convincing polemicist, despite some stops and starts. He began to persuade the astonished teacher–all this to the nuns’ chagrin, who dizzingly followed the twists and turns of the discussion between avemarias.

Don Bartolomé would sigh. “Wow, Manolito, collectivization? It had never really dawned on me before.” And Blood’s proud chest would swell up like a sponge.

Yet just before dawn and the cock’s crow Don Bartolomé would add, “Well, yes, for collectivization we’d be prepared to be executed at once, vamos! The thing is . . . the Russian Revolution–I don’t know–it just doesn’t do it for me. It leaves me cold, Blood, that’s all.”

“I have to do more research, don Bartolomé, so you won’t slip me up by surprise. Also I’m tired. Tomorrow night I’ll convince you in a wink about the greatness of don José Stalín. Don’t you worry.”

Every night Blood savored the sweet honey of intellectual victory. So much so that he didn’t want any advantage over his opponent. He even allowed the school teacher to return home so he could be near his books whenever the final point in the debate–forever the final point–was about to be argued. The nuns, with their hushed chatter, distracted them from the debate, so they were sent back to their cloister. And the priest, who truly was closed-minded and would not be persuaded, was the only one to remain in the makeshift dungeon they’d set up in the church. The militia men divided into two camps: those who found pleasure in the nocturnal get-togethers and the bohemian lifestyles of intellectuals, and those who got bored and went back–relieved–to their former agrarian tasks.

A thousand and one nights had not passed, but less than half that number, when a detachment of the Guardia Civil entered the town. It appeared that the war was not going well for them there. Blood was dozing off in a wicker chair with Paul Leforgue’s The Right to Laziness between his legs, and don Bartolomé had gone off to the river to meditate on collectivization. The guards took down two or three tattered red flags and opened their mouths wide upon hearing that the local Death Squadron was practically a Platonic Dialog.

Before leaving they had to name new authorities to be put in place. The priest proposed don Bartolomé and don Bartolomé suggested Blood–Manolito, I mean.

“Teacher, hombre, I think that might be crossing the line,” said the captain of the Guardia Civil.

Dr. David Alexander works as a translator/interpreter of Spanish and Italian.