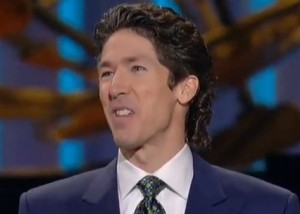 The title of Joel Osteen’s broadcast message this week was “Deal With It!” Joel wanted his audience to understand that there were things in life that we were just going to have to deal with and that would entail suffering. I was very interested to see Joel mention suffering in his broadcast, because suffering is not his usual topic.

Joel was clear that from his perspective, suffering caused by the evils in the world, such as poverty, disease, disasters, etc. were not God’s will for us. From other talks of his that I have heard, I gather that he believes that God intends to lift us out of such suffering. But instead of focusing on the different Catholic perspective regarding those matters, I want to focus on the thing he said about suffering that had this Catholic nodding in agreement.

Joel said that when we are convicted by God of some sin that we need to deal with we will experience that as a suffering. He gave such illustrations as having to bridle our tongues when everything in our flesh wants to lash out at others, or having to curb ourselves when we have a desire for revenge and know instead that God’s standard for us is forgiveness, or the kind of intense struggle that we may enter into to overcome addictions. He said that on such occasions we experience real suffering. But that if we will go ahead and go through that suffering that we will be greatly rewarded by it. It will, as he put it cause us to go “higher” or “to the next level” in our spiritual life.

It is certainly true that disciplining our flesh in its state of concupiscence is a real struggle that entails suffering. One portion of his message though, evoked in me a particular gladness regarding being Catholic.

Joel Osteen talked about a man of his acquaintance who was struggling with an addiction. This man passed into a time when he felt especially strong, as though God was bracing him to finally overcome his problem. But the man did not take any action. He kept putting it off until that sense of strength from God faded, and he felt thoroughly in the grip of his addiction again. He told Joel that he felt like he had “missed his season of grace.” Joel wanted to warn his hearers that when God is prompting them to deal with something they should take advantage of that season of grace and not allow it to slip by. He assured people that God would indeed send another season of grace but he cautioned that the next time it would be harder to deal with the problem, which by then would become even more entrenched.

Of course, it is good advice that we ought to heed the promptings of the Holy Spirit and not ignore them when He convicts us of sin. Otherwise we may be guilty of spiritual sloth! However, I could not help but reflect on what a wonderful blessing it is to be Catholic. I am blessed to know that a season of grace is not merely a subjective feeling I might have of conviction of sin and the internal sense of God strengthening me to endure the suffering necessary to overcome it in my life. Instead I know that this season of grace is objectively always available to me in the Sacrament of Reconciliation. I can, at any time, and should at regular intervals, ask the Holy Spirit to help me make a good examination of conscience, and then throw myself into the Lord’s merciful arms by the ministry of his priest. That’s how we Catholics deal with it!