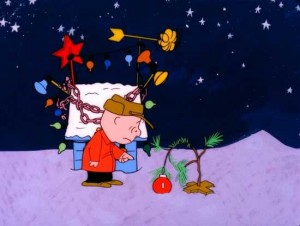 It’s amazing that the show was nearly not broadcast.

I speak of “A Charlie Brown Christmas” — a show that, for reasons I don’t understand, holds more power over me with every passing year.

The show has a very simple premise: Too much commercialization can take the meaning out of Christmas.

As it goes, Charlie Brown is depressed because everyone around him fails to see the true meaning of Christmas.

Lucy complains, for instance, that she doesn’t want stupid toys or a bicycle or clothes for Christmas. She wants real estate!

To resolve his depression, Charlie Brown throws himself into his work as the director of the Christmas play. But that soon falls apart, too.

Distraught, he follows a light in the east and finds his way to a Christmas tree lot. The only tree he can find is a small sickly one. When he brings it back, the others mock him.

But then Linus comes to the rescue. At once innocent and wise beyond his years, Linus tells Charlie Brown he knows what the real meaning of Christmas is. He tells the story of Christ’s birth by quoting the Gospel of Luke in the King James version of the Bible.

“And, suddenly, there was with the angel a multitude of the heavenly host praising God, and saying, ‘Glory to God in the highest, and on Earth peace, and goodwill toward men,’” says Linus. “And that’s what Christmas is all about, Charlie Brown.”

Suddenly, the other characters are transformed. They become compassionate and concerned. They decorate the sickly tree and transform it into a thing of beauty. They wish Charlie Brown a Merry Christmas and sing him a Christmas carol.

The things I like most about the show — the simple, almost primitive animation style, the use of real children’s voices, the lack of a laugh track and the smooth-jazz soundtrack — were the very things network executives despised.

According to USA Today, when CBS executives previewed the show, they hated that it was so unlike anything else on the tube. They said it moved too slow. They thought viewers would hate the swinging score by jazz pianist Vince Guaraldi. And they certainly disliked the idea of Linus reading from the Bible.

“Peanuts” creator Charles Schulz refused to make a single change to his show — and since it had been made under such a tight deadline, there was no time for network brass to replace it with something else. They had no choice but to air it.

And boy, was it a hit! When the show was first broadcast on Dec. 9, 1965, nearly half of the television sets in America were tuned in to watch. The show has continued to receive good ratings ever since.

And now we need to embrace the simple message of the show more than ever before.

Every year, the Christmas advertisements begin earlier. The stores open earlier and stay open longer. The stock market rises or falls based on how much holiday stuff consumers buy.

The older I get, the less interested I am in stuff and the more interested I am in the health and well-being of my loved ones. Rather than spend money on things none of us really need, why not give it to charity or a needy family instead?

I know it is somewhat ironic that a television show, whose advertising has sold a lot of consumer goods, would be noted for its anti-commercial message, but it is — because Charles Schulz was a genius.

Which is why I have big plans when “A Charlie Brown Christmas” airs every year.
I flip off the lights as I watch it — just as millions of kids have done every year since 1965.