Trending Now
You are at:Home»Featured»A Father to Fathers
By Fathers for Good on April 25, 2014 Featured, Parenting 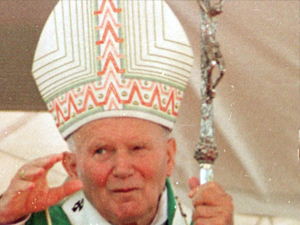 Whether it’s through his exhortation “Be Not Afraid!” or the deep insights contained in Theology of the Body, Blessed John Paul II has had an enduring impact on families and fathers.

John Paul, who led the Church into the new millennium, will be canonized April 27, along with his predecessor, Pope John XXIII.

Over the course of his pontificate, John Paul wrote many encyclicals and other documents that taught about love, marriage, family life and the dignity of the human person. Combined with his personal example of heroic virtue, even amid great suffering, his words have given direction and encouragement to millions striving to live a Christian life.

“The biggest influence he had on us, and the key principle we’ve incorporated into our lives, our writings and our radio program, has been ‘Be not afraid,’” said James Littleton, whose wife and family have been involved in a ministry to families. “That can be applied throughout all our lives, such as having children. It’s the idea of trusting God versus fear. It opens us up to receiving many blessings —new life coming into our families and a beautiful marriage that lasts unto death.”

Littleton and his wife, Kathleen, speak with authority about the blessings of little ones: they’ve had 19 children, 14 of whom are now living. That experience has led them to write a book, Better by the Dozen, Plus Two, which cites some of John Paul’s writings: Letter to Families, Familiaris Consortio, and Theology of the Body.

In addition, Littleton said, John Paul’s 1995 encyclical Evangelium Vitae “helped shore up my pro-life convictions, to be open to life and be able to handle a large family.”

At the same time, John Paul’s great emphasis on the need for a “new evangelization” has spurred the Littletons to be of service to others and the Church. Their apostolate, Forming Faithful Families, operates out of a storefront that is subsidized by Littleton’s insurance business and provides faith formation programs, retreats and speakers to parishes around the country.

But none of that would be possible without a firm family foundation of their own, which Littleton attributes to relying on Church teaching, notably that of John Paul II and his example.

“It’s the whole idea of not being afraid in so many areas of life,” Littleton said. “He kept bringing us back to that central point, and dealing with the adversities of life and continuing on.” John Paul’s witness gave Littleton courage through several major challenges, such as severe financial problems, loss of a home through foreclosure, and “very aggressive leukemia,” which he overcame.

For David Bannwarth and his wife, Marlene, John Paul came along just when they most needed direction in their marriage. Bannwarth, a cradle Catholic, married his wife, a convert, in 1973. The priest they met with for marriage preparation told them to do what they thought best when it came to contraception.

“In retrospect, it wasn’t the best answer I received,” said Bannwarth, 63, of Independence, Kan. Marlene happened to pick up some literature from the Couple to Couple League, which promotes natural family planning, and the couple eventually followed the writings of John Paul II. They then became NFP teachers themselves.

The Bannwarths have five children, all of whom are close to the Church. St. John Paul II has provided a foundation for their family life.

“In his Theology of the Body, when he talks about the unitive and procreative aspects of marriage, the openness to life — those two working together just brought forth the beauty of the sacrament to us,” Bannwarth said. “It’s allowed us to have that strong anchor to hold onto in view of all the attacks on marriage and family life.”

The House of the Father

According to John Paul II, the greatness of human fatherhood is that human beings are given “this astonishing privilege of participating in and representing something of the very mystery of the creator,” said Nicholas Healy, professor of philosophy and culture at the Pontifical John Paul II Institute for Studies on Marriage and Family in Washington, D.C. “But we always have to do that in a way that acknowledges his more fundamental and primary authorship in terms of the bestowal of life.

“For example, the way a human father relates to his child, in a way, it’s the most astonishing thing to have been privileged to participate in the coming to be of new life, but the way we do that is, as it were, by thanking God and acknowledging that God is the source of this life. So we have to be receptive to God; we have to be sons, if we are going to be able to fulfill our task of being father.”

In fact, John Paul, though he was a spiritual father to millions, concluded his earthly pilgrimage as a son. “Let me go to the house of the Father,” he reportedly said only hours before his death. Today, from his own place in heaven, he is still leading others to that house.