Trending Now
You are at:Home»Learn & Live the Faith»Apologetics»A Few Thoughts About Judgment Day and May 21, 2011
By Tom Cabeen on May 19, 2011 Apologetics, Featured 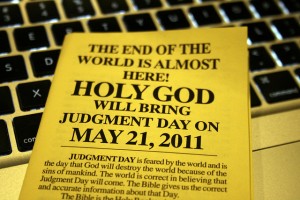 A few weeks ago, I went to New York to hear a friend’s daughter play the cello for her senior recital at Julliard School of Music. As I walked from the subway station to the school, at the corner of 65th Street and Broadway, a sincere-looking young woman left the place where she had been standing, walked over to me and handed me a small pamphlet. Its headline was arresting: “THE END OF THE WORLD IS ALMOST HERE! HOLY GOD WILL BRING JUDGMENT DAY ON MAY 21, 2011.” As I read it, my mind flashed back nearly forty years, to the summer of 1973.

I was on a train headed to the Washington, DC area, engaged in earnest conversation with another young woman. At the time, I was a devout Jehovah’s Witness. I believed that God was going to bring judgment on the world late in 1975, and I was trying to convince her of that. Jehovah’s Witnesses (the Watchtower Society) are Adventists. They believe that it is possible to determine when Jesus Christ will return in glory to judge the world, to punish the wicked and reward the just.

Needless to say, my expectations for 1975 were dashed. The logic upon which the Watchtower predictions were based seemed pretty sound to me, and, since I had been raised as a Witness, I had no strong motivation to seek to independently corroborate the way the Scriptures were interpreted by the leaders of my religion. I trusted them. But the failure of that particular prediction moved me to reexamine the theological basis upon which it had been based, from the perspective of hindsight. That led me to more objective examination of other Watchtower teachings. Within a few years, I was no longer a Jehovah’s Witness.

Back to 2011. I took another look at the pamphlet. The details were different, of course, but even a quick glance revealed that its publishers were using essentially the same approach as Watchtower writers did in the late 1960s and early 1970s: explanations of Bible prophecies interpreted very creatively in the light of current events, accompanied by chronological calculations. (I later discovered that the identical approach, with differing details and dates, of course, had been used in Watchtower publications since the 1870s, producing a number of different “divinely revealed” dates. Every one of them was wrong.)

Another parallel between the perspective of the publishers of this pamphlet and that of the Watchtower is their teaching that religious leaders cannot be trusted. “You can’t turn to your religion or go to your priest or pastor or spiritual leader for help,” they say. To me this appears to be a self-defeating strategy, for by publishing and distributing these pamphlets (accompanied by a rather impressive media campaign, at least in our area) the writers of this folder have, de facto, become leaders of a religious movement

I looked up at the young woman. She had sincere eyes and an open face. Clearly, she was not attempting to deceive me; my guess is that she is a true believer. What makes people like her accept this approach to God and religion? Surely one factor is the desire to be liberated from the burden of life in a world that is far from perfect, to live in a sort of Utopia (defined in the pamphlet only as “heaven.”) But is that what Christianity is all about? From the perspective of one who once held similar views, but is now a Roman Catholic, I would attribute it to wrong expectations, a rather serious misunderstanding of the fundamentals of the good news about Jesus Christ, as taught by his closest disciples, the apostles and preserved within a faith community that has been in continuous existence since Jesus walked this earth.

For so many, possibly including the writers of this pamphlet, God is seen more as an inflexible but powerful sovereign than a loving Father. He seems to have created humans mostly so he could have someone to rule over. Although He gives them free will, he is angry and disappointed when they use it wrongly and break his rules. Apparently, the purpose of the coming Judgment Day, is to eliminate all the rule breakers in a global cataclysm, possibly as soon as Saturday, May 21, 2011 (according to “astounding proofs”)! Is there any hope to survive this destruction? “The Bible assures us that many of the people who do beg God for his mercy will not be destroyed.” The pamphlet’s publishers have even calculated the number of those who will be saved at 200 million, but they do not say where this revelation came from.

There are small kernels of truth in the perspectives presented in the pamphlet, but not much more than that. If one knew nothing of what the Bible or the Church teaches, one could easily get the idea from reading it that God started a creative project that got so out of hand that the only viable option He has at this point is to just destroy most of it and salvage whatever small percentage can be salvaged. Even those who do survive only escape because they have sense enough to “beg for mercy.”

By glorious contrast, according to the historical Christian faith, Jesus is “The true light that gives light to every man.” His death actually broke the power of sin to hold any human. It opened the door for humans to commune face to face with God. Jesus came here to share with us not only his own divine life, but to teach us how to walk in honor, blessedness and holiness; to empower us to live life in all its fullness; to transform us into his own image. He offers us nothing less than the opportunity to be adopted as free sons of a living God: “To all who received him, to those who believed in his name, he gave the right to become children of God…From the fullness of his grace we have all received one blessing after another” (John 1:9, 12, 16).

We each get a lifetime, some longer than others, in which to respond to God’s self-revelation to humans in various ways, including that given through Jesus and the Church he founded. From the Christian perspective, the major event in human history is not the Day of Judgment. It is the day when Jesus conquered the world by his sacrificial death and resurrection. In fact, he explicitly stated numerous times, as recorded in the Gospels, that the Day of Judgment will arrive unexpectedly. According to Jesus, it cannot not be predicted in advance, even by his disciples.

When day dawns on May 22, 2010, most people will go about their business as they would on any other Sunday. But how will the disciples of Harold Camping, the publisher of this pamphlet, react when the expected judgment day does not arrive? Embarrassed? Ashamed? Angry at God? Disappointed with religion in general? You may happen to run across one of them. If you do, invite them to church with you. Reassure them that the failed expectation is not bad news, but good news. Offer them the opportunity to learn the fullness of the Gospel from those who have preserved it down through the years, and to rejoice in the richness and beauty of the genuine Christian faith!