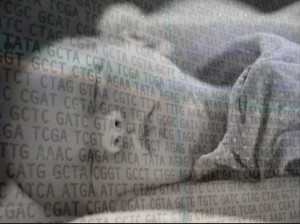 The Kretchmar home is filled with the hum of a breathing machine and the sounds of Mario racing around a television screen watched by 22-month old Jaxon.

“MMMMaaarrrrioooo…,” he mutters under the clear mask which covers most of his tiny face. He’s yelling, but it’s hard to understand, because his voice is so muffled and his body is shaking.  The shaking is a good thing. The special vest he is wearing, while he getting his breathing treatment, helps shake the congestion loose inside his little body.

Jaxon is battling cystic fibrosis. He was diagnosed just days after he was born. The new vest, breathing treatments, up to 20-pills a day.  It’s all part of fighting the pulmonary disease.

In 2009, the Kretchmars turned to the New England Cryogenic Center, NECC, near Boston, when they needed help conceiving Jaxon. The sperm bank’s website talks about having a “healthy baby.” It states: “No specimens are released until it has been tested” for a list of diseases including cystic fibrosis….

The Kretchmars chose donor N170. The questionnaire they received described him as  a dad, a criminal justice major, and a Catholic man with clean family health history. The Kretchmars bought three vials of N170. And, on April 17, 2010, Jaxon was born.

There is so much going on here it is almost too much to analyze.  (Honestly, every time I read this I trip over the fact that the sperm donor was labeled as “Catholic.”) Setting the commodification of life aside, the harsh reality is there are no guarantees when it comes to genetics.

I have tested people for cystic fibrosis for years.  There are over 1000 (and counting) known mutations in the CFTR gene that can cause cystic fibrosis.  Most labs only test for the 70 most common ones.  The other mutations are considered private family mutations. I am sure there are some mutations in minority populations that have yet to even be documented. It is quite possible that the sperm donor carries a mutation not on the normal panels for CF testing.

There are many other genetic diseases like CF where a limited number of the most common mutations are part of the testing.  Anything else maybe missed.  So a “negative” in genetics does not mean you are not a carrier for some genetic disease.  It means that you are not carrying any of the specific mutations the lab tests for.

Most of us are carriers of some devastating genetic disorder and we don’t know it.  (In the case of CF, 1 in 25 Caucasians in a carrier.)  There is absolutely no way any sperm or egg bank could provide “disease-free” gametes.

But in this culture where children are ordered up to our specifications, we want to have recourse when the product we are sold is “defective.”  I feel terrible for the Kretchmars and for Jaxon. (There are some promising treatments for CF on the horizon.) But the reality is that children are not commodities that we can ensure will turn out perfect.