Trending Now
You are at:Home»Featured»A Larger Role for Women in the Catholic Church? Yes!
By Leticia Velasquez on March 6, 2013 Featured, Live in Christ, MyChurchParish.com, Women 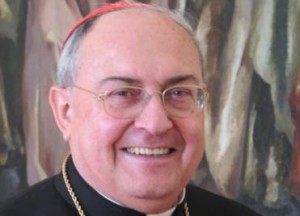 Comments agitating for “women in the priesthood” are found throughout the media, voiced largely by outsiders to the Catholic Church, either non-Catholics or those who have willingly distanced themselves from the Church, so when I read this headline – “Exclusive: Women deserve bigger role in Church, says key cardinal” — my visceral reaction was negative.

“They must have a much more important role in the life of the Church … so that they can contribute to Church life in so many areas which are now, in part, open only to men … This will be a challenge for us in the future,” added the 69-year-old cardinal [Leonardo Sandri], who was interviewed in his office just outside St Peter’s Square

Why should women ask for a ministerial role in the Church; I bristled, what’s the matter with the role of life giver and primary educator to future priests? But upon closer reading of the Cardinal’s remarks, I softened my tone a bit. He was not suggesting that the Church open the priesthood or even the diaconate to women.

Women deserve to have more key positions in the Vatican administration “where they can make a very important contribution because of their qualifications,” Sandri said, adding, “But they must also be co-participants in the dialogue and the analysis of the life of the Church and in (other) areas, even in the formation of priests, where they can play a very, very important role.”

Currently, women in the Catholic Church cannot go beyond the position of under-secretary in Vatican departments, the number three post after president and secretary — which are open only to ordained men. At present, only two women are under-secretaries, one a nun and one a lay woman.

It must first be addressed that a majority of the women — in my experience and that of many faithful Catholics in this country — who have risen to positions of authority in the Church tend to be opposed to an all-male priesthood, and the Church’s moral teaching, they are largely feminist nuns or laywomen. They  have created a tension in the Church between factions, which has not been a means of blessing  — to put it charitably. A priest friend reported that, while in the seminary, he was subjected to an art show containing obscene images of Our Lady and, when he refused to applaud such an outrage, he was promptly informed that his ordination was in jeopardy by the feminist behind the shameful display.

This abuse of power by women in the Church is the reason orthodox Catholic women automatically reject the idea of a larger role for women in the Church. Well meaning bishops have allowed such dangerous women to assume leadership of many religious orders and diocesan offices. Catechism and adult faith formation have been deconstructed; religious orders, Catholic healthcare, and Catholic schools have been decimated. We saw a sister in charge of the major conglomerate of Catholic hospitals sign on to Obamacare, which we know contains mandatory funding and provision of contraception and abortion.

We, who joyfully embrace our Church for her exaltation of the role of women and veneration of the Blessed Virgin as a role model, are often too busy maintaining our Domestic Churches to take on larger roles in the Church. But the Internet can change that, as an army of faithful Catholic women bloggers attests.

Women who embrace the doctrines of the Catholic Church are speaking out from the keyboards in our homes and, I believe are making a difference in what is said about the Church in the public square. We are giving testimony to the truth of papal documents our feminist forebears reviled for decades, like Humanae Vitae. We are testifying to the joys of family life lived in accordance with the fullness of truth found in the Catholic Church. We love our Church and want to strengthen her.  We have a lot to offer seminarians and even the Vatican, and, in increasing numbers, the Vatican is calling us to offer our experience and opinions.  I  know several women who attended Vatican conferences on women, the family, and social communication.  Donna-Marie Cooper O’Boyle, Lisa Hendey, Elizabeth Scalia, Mary Rice Hasson, Teresa Tomeo, Dr Janet E. Smith, Helen Alvare, Pia Solemni, Genevieve Kineke, and Kathryn Lopez to name a few. These women and other dynamic women of faith write articles and books, appear on Catholic and secular media, and form the bulk of the feminine contribution to the New Evangelization.

If the cardinals want to invite women to contribute to the administration of the Church and to offer guidance on what should be part of priestly formation, then I am most enthusiastically in favor of such women having a larger role in the Church. Why wouldn’t I, when I began writing seven years ago in order to be a voice in support of the New Evangelization and the Culture of Life ? I edited a book,  A Special Mother is Born,  a collection of 34 stories from Catholic moms (and some dads) on how their children with special needs are blessings for their families, in hopes of addressing Catholic medical personnel, administrators, teachers, counselors,  and clergy to help guide them in their ministries to such families.

Our Lord spent the great majority of His life living with his closest family member, the Blessed Mother. She was his first teacher, and set into motion His first public miracle; the changing of water into wine at Cana. May she guide His Body, the Church into accepting women of strong, orthodox beliefs as administrators and advisors to help Holy Mother Church develop her quality of maternal tenderness for all her members.