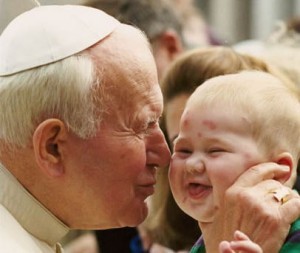 Yes, America, you are beautiful indeed, and blessed in so many ways … But your greatest beauty and your richest blessing is found in the human person: in each man, woman and child, in every immigrant, in every native-born son and daughter. For this reason, America, your deepest identity and truest character as a Nation is revealed in the position you take towards the human person. The ultimate test of your greatness is in the way you treat every human being, but especially the weakest and most defenseless ones.

Blessed John Paul II spoke these words during his apostolic visit to the United States on September 19, 1987.  Nearly twenty-five years later his words offer us opportunity for reflection and observation:  Sadly our nation has not heeded the late Holy Father’s words and has moved further away from an authentic Culture of Life. Instead, our leaders have created policies that have only accelerated our descent towards a Culture of Death in the name of sexual freedom without responsibility, that have ultimately led to loss of millions of innocent lives through abortion.

In his remarks, the late Holy Father reflected on America’s place in history and referenced some of her identifying qualities:

Your genius for invention and for splendid progress; in the power that you use for service and in the wealth that you share with others; in what you give to your own, and in what you do for others beyond your borders; in how you serve, and in how you keep alive the flame of hope in many hearts; in your quest for excellence and in your desire to right all wrongs.

With these words, the Holy Father was not only reminding Americans about our great accomplishments, but he was reminding us of our responsibility as stewards of the great gifts we’ve received. He continued by speaking about America’s desire for equality, justice, true freedom and lasting peace, adding that these can only be realized if America defends life. A lasting prosperity and just moral order are possible in America, but only to the extent that every human being is guaranteed the right to pursue happiness, liberty and justice.

How appropriate for us to reflect on the challenging and prophetic words of Blessed John Paul as our nation comes to this pivotal moment and decides its future. We have a place in history, but how we are remembered is up to us. Will we take an account of our actions and reconcile with our God and neighbor, or will we continue to follow the path that will potentially lead to our nation’s demise? Will we be a nation of life or continue to be a nation of death?

Unfortunately, if we consider the current environment, we clearly have our answer. Our nation’s political leadership, in both parties, has done little if anything to defend life at all stages. There is a lot of rhetoric but little action. The Obama administration is one of the most, if not the most, radical and offensive in America’s history when it comes to protecting the dignity of innocent life. Under the president’s leadership, the U.S. government has continually passed legislation and promulgated foreign policies that promote death. Their decisions have silenced the voices of the most innocent and vulnerable of society, domestically and abroad, who are the victims of this generation’s unhindered appetite for greed, lust and convenience.

What happened to defending the innocent and defenseless? What happened to righting the wrongs and seeking justice for all? What about our Judeo-Christian heritage that anchored us in Natural Law and the Gospel? What about the words of Emma Lazarus, inscribed at the Statue of Liberty:  “Give me your tired, your poor, your humbled masses yearning to breathe free”? Are these mere words written upon tablets, no longer to be remembered by this generation? Is this nation of immigrants so blinded that it cannot see its crime against humanity? Have the annals of history which remind us of what can happen when absolute power is given to a few been erased in from memories? The results of such unbridled power have always caused great harm to humanity – especially to those deemed weak and unwanted.

My third grade teacher, Mrs. Cantrelle, would often tell the class that the only truly ignorant person is one who doesn’t learn from his or her mistakes. What have we learned? Today, it is the pre-born, the elderly, the poor and the defenseless of society who are cast aside for so-called ”progress.” Instead of asking what have we learned, maybe we should ask: Who is next?

Blessed John Paul II attempted to steer us in the right direction, to remind us of the principles that established this republic. He reminded us of our heritage and those who came to this land seeking justice, freedom and peace – sacrificing even life for authentic liberty.

This is the dignity of America, the reason she exists, the condition for her survival – yes, the ultimate test of her greatness: to respect every human person, especially the weakest and most defenseless ones, those as yet unborn. Today, therefore, my final prayer is this: that God will bless America, so that she may increasingly become – and truly be and long remain one Nation, under God, indivisible with liberty and justice for all.

We remember that these great ideals set forth at our nation’s founding, and affirmed by the Holy Father, require each of us to form our hearts and minds to use well the liberty and justice that we have inherited, but is now under such dire threat. This Lent, let us take the time to prepare our hearts for Easter through prayer, fasting and almsgiving so we can ourselves be more truly free, and share true freedom with others.