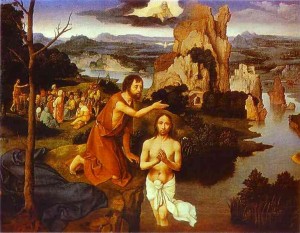 “We’re on a mission from God.”

In the 1980 movie The Blues Brothers, outlaw musicians Jake and Elwood Blues receive a divine commission to save the orphanage where they grew up by playing a one-night-only charity concert.  Though Jake and Elwood could “use some churching up,” they are convinced that their plan will succeed because they saw the light while listening to a gospel choir.

Any Catholic knows that there is more to Divine Revelation than James Brown.

We might not all be renegade blues musicians, but we are on a mission from God.  Christian baptism exists to inaugurate new members into our Church with water and the anointing of oil.  Then God calls the baptized by name and issues the divine mandate, our vocation.  Our mission, should we choose to accept it, is to build the kingdom of God.  This divine work order is written upon the soul of every Christian, an irrevocable seal embossed on a space in our hearts that only God can see and by which he identifies us as his beloved children.

Saint Peter says that with God there is no partiality but he does play favorites—his Beloved Son with whom he is well pleased.  In the story of the Baptism of the Lord Jesus hasn’t even begun to work and already he has the Father’s full confidence.  Jesus’s baptism sets the standard for Christian baptism and the acceptance of the vocation that God has planned for us.  The deacon or the priest draws the water across our foreheads, anoints us with oil, and proclaims the Trinitarian formula—voila!  Now you’re a Christian.  That’s forever.  Nothing can remove the sacred seal from the soul of the one who has been welcomed into the family of faith via the first sacrament.  There is nowhere to go but upward and outward.

For John, Jesus’s unexpected baptism in the Jordan River was not just another day on the job.  Baptizing was John’s calling, the mandate he received while still in the womb of Elizabeth.  He did this for hours every day.  “The whole region around the Jordan were going out to him and were being baptized by him in the Jordan as they acknowledged their sins” (Mt 3:5-6).

John looks up.  He sees Jesus standing in line.  “I need to be baptized by you and yet you are coming to me?” (Mt 3:14).  John is a sinner like everybody he has been baptizing.  Jesus is a new sort of clientele—a man like us but he has not sinned.  “Allow it now, for thus it is fitting to fulfill all righteousness, ” Jesus replies (v 15).  To fulfill righteousness means to accept and to carry out God’s will.  Nothing could prevent that, not even John, who allowed the baptism to take place and then miraculous events occurred.  God’s voice introduced Jesus: “This is my beloved son, with whom I am well pleased” (17b).  Baptism is the equalizer of souls and we are all the same in God’s eyes—chosen and beloved.  The Trinitarian family gathered on the banks of the Jordan that day.  Mission accomplished.

John baptized for the forgiveness of sins.  Christians receive the same benefit from our baptism but so much more.  We become lifetime members of the Church, which is not an exclusive club, for “God shows no partiality” (Acts 10:34).  Like Peter our mission is to draw more members into the ranks.  Peter received a vision in which he was commissioned by the Spirit to seek out the family of Cornelius and to bring them to salvation through baptism.  That involved some serious networking.  To them he delivers a textbook baptismal sermon, saying that salvation is universal, not for a privileged few.  “Can anyone withhold the water for baptizing these people, who have received the Holy Spirit even as we have?” (Acts 10: 47).  The Christening of the family of Cornelius took the Church in a new direction and many more families were admitted to the household of faith day after day.

Baptism is the gateway.  God hands down our divine commission. We receive the forgiveness of sins, and we enter into a universal membership that stretches across the ages and has changed the destiny of humanity.  We’re all in this together.  We’re on a mission from God.