Trending Now
You are at:Home»Featured»A New Day is Here
By Kevin M. Tierney on March 13, 2013 Featured, Live in Christ, MyChurchParish.com 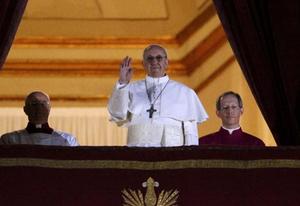 If there is one thing about the Holy Spirit, he loves to throw a curveball.

When white smoke appeared, Fox News’ Megyn Kelly and some wannabe pundit (whose name escapes me) were spending their time talking about how we were going to get a pope who was younger to help appeal to the masses.  Or how the Italians were going to relcaim the papacy.  Instead the Cardinals selected a 76 year old Jesuit who nobody outside of hardcore ecclesiophiles had heard of.  If you want God to laugh, tell him your plans.

We now have a Pope, and he is Pope Francis.  The first Latin American Pope, the first Jesuit Pope, and the first to take the name Francis.  What information can we divine from the selection of this name?

I believe I can confidently state that whatever predictions we make today, most of them will turn up to be wrong.  At age 76, he might only reign a few years.  Or he could reign 15 or even 20 if God has a real sense of humor.  (See Leo XIII for a classic example of what happens when you think  Christ’s vicar is bound to only rule a few years.)  The discussion will be dominated by people talking about his “conservative” stances on abortion, homosexuality and contraception.  If we ignore it when we talk amongst ourselves, the better.

Francis clearly points to either St. Francis of Assisi or St. Francis Xavier, two men known for their simplicity, and more importantly their evangelical zeal.  The Church needs both.  Her priests need to be reminded of simplicity in their lives.  Most Catholics today do not practice their faith, and a good case can be made that those who do are far too insular, sharing Christ from the comfortable perches of their own parishes or amongst the choir, ones who duck in fear the moment Christ needs to be proclaimed to the world.

There are some of my traditionalist brethren who are afraid of this new Pope, in that he did little to nothing to implement Summorum Pontificum in his diocese.  We don’t really know all the facts of the situation, so lets just do our best to stay silent and see what happens.  Besides, if we get a pope who leaves us alone and let’s us worship in communion with Rome according to the Mass of our ancestors, there is something to be said of the desire to be left alone.  If it is God’s will that the Latin Mass exist (and it is!) then it will exist.  Let’s do our best on the individual level bringing more and more people to this Mass, then worry about things that are well beyond our control.

As Pope Francis bowed down asking for prayer, let us do the same always.  If he is indeed to be a reformer, he will need all the prayers and allies he can get.  He will be installed formally as pontiff on the Feast Day of St. Joseph.  If there is a better candidate for his protector than the protector of the infant Christ, it escapes me.