Trending Now
You are at:Home»Columnists»A New Kind of Rebel
By Colleen Carroll Campbell on August 27, 2011 Columnists, Featured, On Media 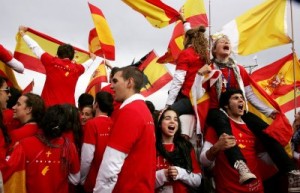 Another World Youth Day has come and gone, and with it, all the usual speculation about what it means. Ever since the late Pope John Paul II launched the international faith festival in 1984 by welcoming 300,000 young Catholics to Rome, the chattering classes have struggled to account for its appeal. That struggle continued last week, when nearly 2 million young people confounded conventional wisdom again by descending en masse on secularized Madrid to celebrate their Catholic faith.

Why did they come, these young pilgrims from St. Louis to Sydney to Shanghai? Didn’t they get the memo circulated by their wiser, more worldly elders, the one that says organized religion is out of vogue and the pope is out of touch?

It’s a question that arises every time another World Youth Day rolls around, and answers have ranged all over the map. In the early years of these gatherings, secular pundits attributed the robust young crowds to the religious character of the host countries. Of course, a million young people would turn out to celebrate the faith in Argentina in 1987 and nearly 2 million would do so in Poland in 1991. What else would you expect from countries that still harbor such traditional Catholic sensibilities? You’ll never see such crowds in wealthier, secular Western Europe or North America, they said.

That storyline faltered in 1993, when half a million young Catholics came out to cheer the pope in Denver. It took another hit in 1997, when the Paris World Youth Day attracted more than a million enthusiastic young pilgrims.

The explanation of choice then shifted: It’s John Paul’s rock-star charisma, the experts said, not his faith-filled message, that drives World Youth Day’s success. Many commentators clung to this theory as late as 2002, when 800,000 young Catholics converged on Toronto to celebrate their faith with an 82-year-old pope so crippled by Parkinson’s disease that he could barely walk and talk.

They finally were forced to abandon this hypothesis three years later, when John Paul’s shy and scholarly successor hosted his first World Youth Day in Germany and attracted a million pilgrims from nearly 200 countries. Pope Benedict XVI’s concluding Mass in 2005 ranked as the largest religious service in Germany’s history and one of the largest in World Youth Day history.

Yet critics continued to dismiss the event’s significance. It’s just a Catholic Woodstock, they said, an excuse for young adults to travel and party. They may put on a pious face when the pope-mobile passes by, but most are mocking the whole thing behind his back.

As in previous years, the reality of last week’s World Youth Day celebration exploded the theories. Yes, some young people probably hitched a ride to Madrid just for kicks. But the ubiquitous images of pilgrims peacefully praying and singing praise hymns through the streets of Madrid made that hedonistic rationale tough to swallow.

As for the travel perks of the experience, most young adults with the means to get to World Youth Day could find easier ways to spend a summer week than hiking in 104-degree heat, sleeping on the floors of schools and church basements and foregoing showers for days on end while waiting in hour-long lines to use the Porta-Potty. If the young Catholics who gathered in Madrid were there just to take it easy and soak up some rays, why did more than a million of them spend the last night of the festival kneeling in the mud at a round-the-clock prayer vigil?

Their zeal impressed even Benedict, who joined them in braving the fierce rainstorm that blew in at the start of the vigil. In his homily the next morning, the 84-year-old pope alluded to his own theory about World Youth Day’s appeal: It offers young people both a personal connection to God and a communal experience of worshipping him. In societies that increasingly treat faith as a private, slightly shameful habit akin to smoking — something you can indulge behind closed doors, but best not practice in public — World Youth Day reminds young believers that authentic faith always finds support and expression in a larger community.

“We cannot follow Jesus on our own,” Benedict said. “Anyone who would be tempted to do so ‘on his own,’ or to approach the life of faith with the kind of individualism so prevalent today, will risk never truly encountering Jesus, or will end up following a counterfeit Jesus.”

Secular experts may never acknowledge World Youth Day for what it is: a genuine revival among a new generation of believers bored by the banalities of our materialistic, me-first culture. That’s all right. Judging from their deafening applause, the young pilgrims gathered in Spain last Sunday already know what generations of rebels before them have discovered: that they do not need permission from skeptical elders to pursue truth wherever it leads, even if it leads to the doors of a church.