Trending Now
You are at:Home»Featured»A Photo Montage of Tolerance
By Joseph Backholm on October 31, 2012 Featured, Government & Politics, The Homosexual Agenda, The Social Order Every time someone mentions the fact that individuals have been sued or fired because of their beliefs about marriage, those trying to redefine marriage scoff, “Impossible.”   Every time we mention the fact that children have been taught about same-sex “marriage” in public schools they’re outraged by the lies and distortions.  And when they hear from the individuals who lived through the experience, they say that it was somewhere else, but not here.

“Just because something happened, doesn’t mean it could happen,” they insist.  And they seem genuinely outraged when people don’t buy it.

Maybe you’re still skeptical about the fact that people might face legal trouble for their beliefs about marriage.  Perhaps you think that there might be some unreasonable or unusually sensitive people in other states, but not here in Washington State.  After all, Washingtonians really do “live and let live.”

Well…maybe we could run a little experiment to test that theory.

Why don’t we put up a bunch of yard signs that indicate support for traditional marriage.  If people were going to truly tolerate people who have a difference of opinion about the marriage issue, surely they will also tolerate a simple, polite indications of their position on a yard sign. 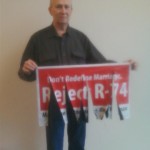 Well, as good fortune would have it, this experiment has been on-going for a few weeks now.

One of the many questions we are answering with Referendum 74 is whether we want to give additional leverage to people who believe they have a moral obligation, even in defiance of the law, to silence those who have a difference of opinion on this issue.

And we’re supposed to believe that once marriage is redefined they’ll be happy with “equality” and simply let us live our lives.