Trending Now
You are at:Home»Learn & Live the Faith»Catechesis»A Preachable Message: The Dynamics of Preaching NFP
By Patrice Fagnant-MacArthur on January 8, 2015 Catechesis, Featured, Marriage, On Books 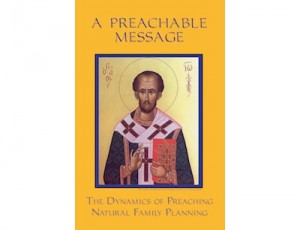 When was the last time you heard a priest give a homily that mentioned Natural Family Planning? If you are like me, the answer is never. Admittedly, it isn’t necessarily a topic that I would want discussed at a Mass where younger children are present, but there are many times when it would be appropriate, such as at Masses on college campuses or on retreats or in marriage preparation programs. Yet all too often, priests fear bringing the topic up. They know it is a difficult subject for many and so they avoid it with a ten-foot pole.

A Preachable Message, compiled by the Billings Ovulation Method Association, is working to change that. In the foreward, Cardinal Timothy Dolan writes, “This book . . . is written by clergy, for clergy, to use for the good of marriages, families, and our promiscuous culture. A small band of faithful Catholics are on the front lines doing their best to promote and defend NFP, and every priest or deacon who preaches about the gift of NFP joins in solidarity with these faithful Catholic witnesses.”

The simple truth is that many priests are scared to preach about NFP for various reasons. Some feel that because they are celibate men, they don’t really have the perspective to speak about marriage issues. Others feel that due to the sex abuse crisis, Catholic clergy have lost the right to talk about sexual morality at all. Others feel that the message won’t be received well so it isn’t worth discussing. The first part of this book contains interviews with priests who do preach on NFP and who want to reassure their fellow clergy that these fears are unfounded. In general, the message of NFP is well-received and bears fruit in happier marriages. As Archbishop Charles Chaput shares, “They will find that the Lord gives them the strength to communicate this teaching in the right way, to speak it clearly. And I believe they will be astonished at the response that such preaching generates in the lives of the faithful.” Priests shouldn’t worry that if they preach this message that they will lose people. Instead they should worry that “if priests don’t preach the Church’s message about contraception, heaven loses people. . . . Should we stop teaching the truth because it is difficult? Of course not.”

The book also includes homilies that various priests have given which include a discussion of NFP, and Prayers of the Faithful that include mention of contraception as well as cover the full range of sexual issues and sins. The last section features Scriptural texts in the liturgical year that can be used as a jumping off point to discuss NFP. There is also a prayer for the conversion of those who have practiced contraception. This book should be in the personal library of every Catholic priest and deacon. The updated edition can be purchased at http://www.boma-usa.org/preachable.php.

Anyone searching for a teacher of NFP can visit http://www.boma-usa.org/teachers.php to find one near them.