Trending Now
You are at:Home»Featured»A Rarity in a Cuban Suburb: a New Church Will Be Built
By ACN-USA News on November 13, 2015 Featured, Those in Need 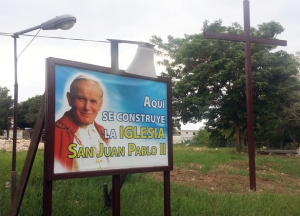 ‘Here the Church of St. John Paul II is being built’; ACN photo

HAVANA, Cuba—The skyline of the suburb of Guiteras, on the outskirts of the Cuban capital, is dominated by grey prefabricated buildings that are crumbling badly, weakened by the moist tropical temperatures. Some 32000 people live in this place that looks like so many others on the island nation. But Guiteras is very different in one respect: a new Catholic church is being built there, which is a great rarity.

In a place where no old churches date back to the time before the revolution, Catholics generally have to meet in private homes. Up until now, building permits for new church buildings have been approved in only a few cases. Cuba’s President Raul Castro made the Guiteras property available to the church after Pope Benedict XVI’s visit to the island in 2012.

“Up until now, we have been praying and meeting in the courtyard of a private home. We are looking forward to moving into our new church,” Deacon Manuel Hernandez told international Catholic charity Aid to the Church in Need. It will be some time, though.

“We now have the building permit. However, there hasn’t been a lot of progress. We don’t have enough materials and building equipment. A bulldozer was supposed to excavate the foundation. It broke down after one hour. Now we simply have to wait,” Hernandez said.

Saint Pope John Paul II will be the patron saint of the new church. He was the first Pope to visit the Caribbean island, in 1998. That papal journey is credited with triggering, however slowly, a willingness on the part of the regime to grant the Cuban Church more liberties, though innumerable restrictions remain in place.

The local Catholic community in Guiteras, meanwhile, is not sitting still: “We have lay missionaries who go to homes. In addition, we pass out food to elderly people in need. We want to intensify these efforts once the new church is completed. We also want to build a pastoral center and a sports field here. With these, we want to appeal to young people in particular,” the deacon said.

This pleases the older members of the parish. Amalia, for example, an elderly lady who is one of the founders of the parish in Guiteras, and regularly joins other women in praying the rosary in a temporary chapel in the spot where the new church will be built. She said: “When the new church is finally standing, it will definitely draw more people. It is going to be wonderful. Twenty-one years ago we began meeting in private homes to read the Gospel and to pray. It wasn’t always easy. People were even not allowed to hang up a cross or a picture of the Virgin in the flats provided by the state.”

However, the woman is convinced that the faith can take advantage of fertile ground in Cuba. “There used to be only a few. Today, hundreds of people come to our services. All Cubans believe. Anyone who claims anything else is lying,” she said.