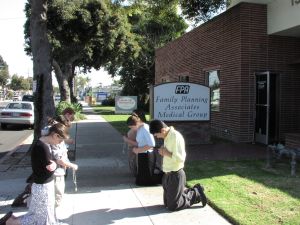 In one of his homilies, Fr. Mitch Pacwa of EWTN told the story of a group of seminarians who visited a silversmith to see how silver is refined so that they could understand better the references in Scripture about the necessity that we be refined like silver refined by a silversmith. The seminarians watched as the silversmith refined the precious metal over and over, each time removing more of the impurities, the dross. When they asked the silversmith how he knew when the silver was properly refined, he answered that he was done when he could see his reflection in the silver. The message was that the impurities of our lives will be refined out of us when the face of God is reflected in our lives.

All Christians are required to refine impurities from themselves, challenging themselves to be reflections of the image of God. Praying and witnessing to life at a place as evil as an abortuary, and doing so “in season and out of season” and “with great patience,” can be a refinement leading to a reflection of the face of God in the pro life witness, which is hopefully visible to others.

It is a refinement of the soul to be at an abortuary, begging for the lives of the unborn marked for death and to submit to the usual mockery and sometimes the curses and threats of the abortionists and of the abortion seekers who do not want to be reminded of the truth of what they are about to do (even if that reminder comes in the form of a charitable offer of help and assistance), To again and again engage and challenge political leaders who have traded the blood of innocents for political gain (especially Catholic politicians), to consistently submit to the derision from the pro abortion social and political elites in government, the media, universities, and our local communities is also a refinement. Not least, to engage in constant prayer for the protection of innocent life and for the conversion of those involved in the blood trade of abortion removes the dross, and refines the soul too.

This is an essential insight because the purpose of praying and counseling at an abortuary is to refine the silver of creation that is the mother, father, grandparent, friend, or whoever comes to participate in the killing. In the charity of words, but mainly his or her simple presence, the pro life witness can proclaim the truth in an effort to persuade abortion seekers to purify their vision that they may see the face of God in those around them, including the child within. Even in such limited and usually hostile circumstances there is an opportunity to challenge them to refine and purify their hearts and souls so that they may see the reality of God’s creation in their child, rejoice in that life, and take their unborn child home to be nurtured and to be born into love.

Of course, most times hearts are hardened, and the words of life are rejected. That rejection is painful to hear and to watch; sometimes the scene is more painful than others.

One morning a pregnant teenager, her mother, and her boyfriend and father of the child arrived at the abortuary. The mother was driving; a rosary was hanging from the rear view mirror. They parked, and exited the car. We offered our brochure and information about the financial and emotional assistance which we would provide to them.

The mother was angry. She said that her young daughter did not need any help from us, and, when asked, said that yes she and her daughter are Catholic, and that they go to Mass. But, she said, her daughter was going to get rid of the baby, so be quiet and stay out of it. We briefly spoke to the young 18 year old father, and learned that neither he nor his girlfriend wanted an abortion. He was clearly in great distress, if not anguish. But the girl’s mother was determined.

Then the parents of the young father arrived. We learned that they had come to stop the abortion. They went inside the abortuary.

After a while the young father came outside by himself. He was distraught to the point of sickness. He bent over, and heaved repeatedly. Then he went back in. This scene was repeated several times.

Later his parents came out, got into their car, and drove up in front of the abortuary. The young man and his pregnant girl friend came out, both crying, and talked to his parents and to my colleagues. But they would not leave with his parents, the power of the mother over her daughter was too powerful, and they both went back inside. His parents drove off in sadness.

It was clear that young man and woman knew that her womb held their living child, and that they did not want to kill that child. They instinctively knew that killing their child was wrong. As most parents, even these two teenagers in that life and death predicament saw the face of God in their child and resisted killing their child. As a tribute to my pro life colleagues they likely saw the face of God reflected in them as well.

The girl’s mother tried hard to avoid and to reject what was being presented to her, and to shield herself from what she was seeing before her and in her heart. But the more she tried the more she failed, the angrier became, and the more determined she was to have her way. Her angry pride would surely turn to pain and sorrow, but she will not be able to forget because it was the face of God that she saw, and that vision will always be with her.