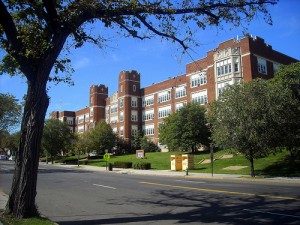 What percentage of elementary school children in the District’s public schools is proficient in math? What about reading?

What is the proficiency of D.C. high school students in these areas?

The answer: less than half.

These dismal figures are well-known, more so because they came under questioning when allegations surfaced of cheating on the part of teachers in order to affect overall rates of improvement.

With reading and math scores such as these, there is only one logical thing to do: Implement a standardized test for sex education!

Next spring, children in the District’s fifth, eighth and 10th grades will take the nation’s first standardized test to discern their proficiency in health and sex. This is so the school system complies with a mandate on the part of its Office of State Superintendent of Education to evaluate the efficacy its comprehensive health and sex curriculum.

So the new 50-question test will measure progress in these areas. Apparently, scores won’t be individualized, but rather will be presented on a school-by-school basis.

Not surprisingly, folks on the left applaud this move as a means of legitimizing the notion of comprehensive sexuality education.

Some of us on the right think you can teach what must be taught about sex in biology class. But then, some of us are dinosaurs who just want a population of citizens that can read and write and balance a checkbook and who are willing to educate our children at home about sexual morality and behavior.

To wit: Adam Tenner, executive director of MetroTeenAIDS, an organization that, among other things, provides contracted sexuality-education programs for D.C. Public Schools.

Mr. Tenner was quoted as saying, “We are not preparing teachers or students to get good, high-quality sex and reproductive education.”

Mr. Tenner’s organization is out to change all that. Last year, at D.C.’s Harvey Middle School, MetroTeenAIDS administered a “sex test” to seventh-graders in an effort to assess their knowledge of sex and health issues. The survey began with a simple question, “What is your gender?” There were four possible answers: male, female, transgender (male to female), transgender (female to male).

The questions got harder from there, including:

How sure are you that you …

… Can name all four body fluids that can transmit HIV?

… Can correctly put a condom on yourself or your partner?

… Will avoid getting yourself or your partner pregnant if you have sex?

… Can convince a reluctant partner to use barrier protection (i.e., condoms, dental dams) during sex?

Presumably, the sex- and health-education exam slated for next spring is not akin to the graphic and intrusive “sex test” favored by the folks at MetroTeenAIDS to assess the knowledge and habits of youngsters.

But parents and others should be warned: This is most certainly the direction leftist sex educators want to go.

If precious classroom time is going to be spent on sex education, by all means test kids to be sure they’re learning something.

But the bigger question remains: When school systems fail in their principal missions — to instill basic literacy and numeracy in their pupils – perhaps they should consider shedding their social-engineering agendas in favor of reading, writing and arithmetic.

Radical, I know. Call me a dinosaur.

I gather “all of the above” was not an option.