Trending Now
You are at:Home»Featured»A Tireless Pastor Leaves the Killing Fields of Syria
By ACN-USA News on June 30, 2015 Featured, International Issues, Those in Need 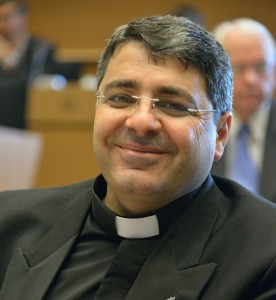 It would be hard to find a more dangerous posting in the Jesuit order today than ministering to the faithful of this city in the heart Syria’s “Valley of the Christians.” And Syrian Jesuit Father Ziad Hilal has been based here for half a dozen years, witnessing some of the worst horrors of the country’s civil war that began in 2011 and killed more than 200,000 people—including some 10,000 children—to-date.

Back under the fragile control of the Syrian regime, Homs—much of the city destroyed—was the site of fierce fighting between the government and rebels for several years. Early last year, a fellow Jesuit, Dutch Father Frans van der Lugt was brutally executed by a jihadist. Yet, Father Hilal stayed on. “As a priest, it is my duty to help people,” he said.

“We already began providing aid to war refugees in 2011,” Father Ziad told international Catholic charity Aid to the Church in Need; “unfortunately, we haven’t run out of work since.” A major part of his job recently has been organizing the provision of humanitarian aid to displaced people through the Jesuit Refugee Service. The latest wave of refugees is coming from the major city of Aleppo, which is fiercely fought over by the regime and the opposition and also sits in the crosshairs of ISIS.

“At the moment we are taking care of about 300 Christian families from Aleppo,” said the priest, stressing that the greatest difficulty is finding housing for the newcomers: “most of the people have nothing. They also don’t have jobs. And so we pay the rent for them. But unfortunately, there are those who exploit the emergency situation—even including Christians,” said Father Hilal, adding: “War also brings out the worst in people.”

Father Ziad emphasized that all Syrians, Muslim and Christian alike, are suffering from the war. Yes, Christians, as a minority, are “particularly vulnerable,” as they are targeted jihadist bent on religious cleansing. The recent kidnapping of Syrian-Catholic Father Jacques Mourad has “hit the Christian community hard,” the Jesuit said, noting that Father Mourad is “a symbol for the people. From the very start he helped the refugees and worked towards reconciliation. Of course, not everyone likes this.”

Father Hilal will soon be enjoying the safety of Dublin, Ireland, where he will continue his Jesuit formation. He said: “I know that our team will continue the work. It is not dependent on me.

“God is the Giver of all good things. We just pass it on. In my opinion this is the spirituality of all Christian aid work. And so I entrust our refugee work entirely to the grace of God. He loves us. He will not forsake us. Syria needs its Christians. We are the ones who can bring about reconciliation. We are the agents of peace. We serve Syria.”