Trending Now
You are at:Home»Featured»A Visit to Assisi: Blessings and Spiritual Growth
By Mark Armstrong on October 4, 2011 Featured, Travel 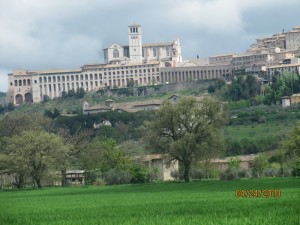 Today, October 4th is the feast day of St. Francis of Assisi.  Last year, on a pilgrimage to see the Shroud of Turin, north of Assisi in Italy, my travel companions (three teenage girls) and I got to spend a few special hours in Assisi.  Seeing the Shroud left an indelible impression on me and spending time in Rome can only enrich a Catholic’s faith, but, Assisi and the story of St. Francis can move you in its simplicity.

When I took the three teenagers with me — newly-confirmed daughter Teresa and two of her friends — to see the Shroud of Turin, I needed to figure out a way to get from Turin to Rome.  So we rented a car, and using a GPS unit we left Turin and drove down the western Italian coast and stopped at Pisa to see the famous Leaning Tower.  The tower is actually a bell tower that was constructed for a massive Cathedral built over a thousand years ago.  Nearby we found a farmhouse in the beautiful hill country of Tuscany to stay overnight before we planned to leave for Rome the next morning via Assisi.

When we left Tuscany that April dawn, its olive trees and grape vineyards were blooming and the spring air was filled with wonderful scents of blossoming flowers.  After spending a cozy night in our warm farmhouse that was built in 1846, we set the GPS units to lead us to Assisi, about three hours away. Seeing Assisi was striking for the first time, especially when our GPS unit routed us through a back country road. I think this was a mistake, but a welcomed one, because the majestic views driving up the back roads were spectacular (see more photos here). 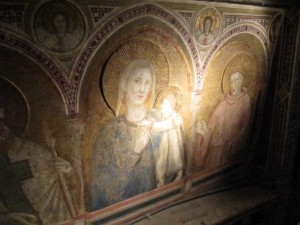 The magnificent Basilica of St. Francis was reached by hiking up beautiful cobblestone streets lined with shops selling everything from rosaries to prayer cards and lunch items to toy figurines of St. Francis.  Knowing our time was short we quickly decided to purchase a 15-minute guided tour that would take us up the scaffolding to the very top of the Church to see the restoration work being done on frescoes that date back centuries.

With an hour before that tour began, we went inside the massive Upper Church and found a Franciscan monk there offering pilgrims a chance for a mass to be said for them.  I struck up a conversation with Brother Sebastian and learned he was the youngest of 9 children.  He was delighted to know that we had 10 children and that Rebecca comes from a family of 9 as well.  Interestingly he had a prayer card of Our Lady of Guadalupe next to him.  We talked briefly about Our Lady’s influence in our lives.  Brother Sebastian said he was deeply devoted to the Blessed Mother.  Explaining that I was writing articles about our pilgrimage to Italy, we exchanged email addresses to keep in touch.  I asked him to say a Mass for all the intentions of our families. Since then Brother Sebastian and I have maintained a wonderful email correspondence, each remembering each other during special times in our lives over the last year and a half..

When our time arrived to climb the scaffolding to see the frescoes up close it was amazing to realize the detailed work that these artisans put into their paintings especially when you remembered that no one could ever see their work after it was done.  From the bottom of the church floor to the top reaches of the ceiling, minute details in the frescoes, with deep spiritual symbolism and meaning, could only be seen by those who created it, or, as our guide said, “the eyes of God or the angels themselves.” 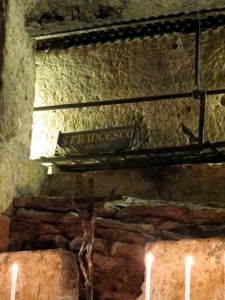 Climbing down, we entered underneath the Basilica to see the actual tomb of St. Francis.  Remarkably, as I knelt in prayer before his last earthly remains, I realized that St. Francis only lived for 44 years.  He was canonized in 1228, just two years after his death, and the foundation stone for the church was laid by Pope Gregory IX himself in 1228.  Two years later, and four years after his death the uncorrupted body of St. Francis was brought in a solemn procession to a temporary resting place while the church was finished. In 1230 St. Francis was finally laid to rest.  We all spent some silent time in prayer, repeating the St. Francis Prayer.

O Divine Master, grant that I may not so much seek to be consoled as to console;
to be understood as to understand;
to be loved as to love.

Sadly our time to leave and head for Rome had come.  The 90-minute drive is simple today over high speed highways.  Nearly 800 years ago, Francis made to journey to Rome on foot and we can only imagine the hardship such a journey of over 100 miles would have entailed for him. On that pilgrimage to Rome, he emptied his purse at St. Peter’s tomb, then went out to the swarm of beggars at the door, gave his clothes to the one that looked poorest, dressed himself in that fellow’s rags, and stood there all day with hands outstretched. After returning from Rome back to Assisi he prayed in the humble little church of St. Damian outside the walls of Assisi, he felt the eyes of the Christ on the crucifix gazing at him and heard a voice saying three times, “Francis, go and repair My house, which you see is falling down.” 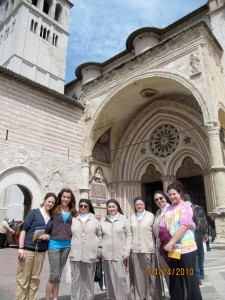 St. Francis is an example of what we all can do when we listen to God. Whether it is the latest scandal, the lack of Catholics receiving the sacraments, or being disobedient to Church teachings, you can sometimes feel like things are not going well for the Church.  But in reality, throughout the course of its history, there have always been good times and bad times.  St. Francis lived only 44 years and look how he changed, through the grace of God, the entire Catholic community.  Or John Paul II; who would have guessed that a young man that wanted to be an actor, caught in Nazi-occupied and then Communist-controlled Poland would one day become one of our greatest Popes? Or have a parking garage named after him at Assisi for that matter?

If we all choose to follow what God is calling us to be, we will all become God’s instruments and the world will be like heaven on earth. What was heaven for me on my trip to Italy last year was seeing these young girls ages 12-14 learn more and more about the Catholic faith (especially since Samantha is Baptist!).  Rebecca told us at dinner one night that she wanted to become a nun, “not one of those who dress ordinary, but one who wears a habit.”  And my daughter Teresa caught sight of several nuns at Assisi  and instantly asked to have her picture taken with them in front of the Basilica.  I know God has a plan for these girls, and that the fruits of this trip will all come if we continue to nurture them on the way.