Trending Now
You are at:Home»Featured»A Warning From Norway
By Frank J. Gaffney, Jr. on July 26, 2011 Featured, On Media 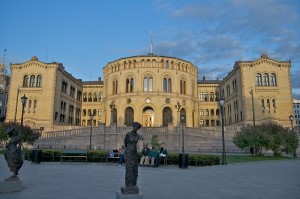 Almost lost in official Washington’s preoccupation with the partisan slug-fest over raising the debt ceiling and reducing the deficit was the despicable, murderous attack in Norway on Friday.  Unfortunately, such inattention increases the likelihood that the wrong lessons will be learned from the mayhem – and a proper response to the mayhem inflicted upon that Nordic ally will not be forthcoming.

The predictable narrative has already begun to take hold.  The confessed perpetrator of a bombing of government offices in Oslo and a seek-and-destroy operation at a Labor Party youth camp on Utoya Island, Anders Behring Breivik, is depicted as a “Christian,” “conservative” and/or “right-wing extremist.”  His attacks, we are told, were animated by a delusional ambition to save his country from an Islamic take-over.

Much remains to be learned about this evident psychopath and his precise motivations for acting in such a deranged fashion.  Still, an unholy axis of Muslim Brotherhood operatives and those on the Left – groups whose spokesmen, ironically, endlessly inveigh against precipitous judgments when jihadists are the perpetrators – have been quick to find in this attack proof of their favorite meme: that conservatives and Christians are as much a threat to domestic tranquility (if not more) as are those seeking to impose the totalitarian Islamic politico-military-legal doctrine of shariah.  They insist that as much effort (if not more) should be expended by law enforcement and other government agencies to counter such “Islamophobic” right-wing extremists as is applied to Muslim “violent extremism.”

Worse yet, they want us to believe that a number of individuals about whom Breivik wrote admiringly are inciting to violence when they warn about the threat posed by shariah’s adherents.  That list includes prominent, responsible figures on both sides of the Atlantic.  He even cites, although mostly critically, one of my own columns in the Washington Times.

As it happens, the carnage inflicted by Breivik stands in stark contrast to the efforts of men and women across the Free World who are striving not only to raise awareness of what the Brotherhood calls its “civilization jihad,” but are making real progress through entirely lawful means to counter that stealthy effort, again in the MB’s words, “destroy Western civilization from within.”

For example, authentic Christians who are being persecuted for their faith in places like Sudan, Nigeria and Egypt are responding with peaceful demonstrations to the burning of their churches, the kidnapping of their daughters and the beatings and murder of their coreligionists.  Across Europe, citizens and leaders are pushing back legislatively and morally against what amounts to Islamic totalitarianism by; voting to ban minarets in Switzerland, limiting immigration, banning burkas for security reasons, etc.

The good news is that, in Europe if not in the Muslim world, the popular tide has begun to turn against the Islamists.  Europeans in particular are rediscovering their own values through conservative political parties and the defense of their own free speech. From French President Nicholas Sarkozy’s insistence on his country’s secular identity to Dutch parliamentarian Geert Wilder’s victory in court for free speech, the fight against Islamicization is actually strengthening Western institutions.

In other words, the facts are that we are beginning to change public opinion and national policy.  Anti-Islamicization parties are increasingly part of coalition governments in, for example, the Netherlands, Denmark and Italy.  Mainstream parties and governments are adopting conservative platforms that would have been unthinkable even five years ago.

Much credit for that growing public support for the rule of Western laws over shariah is due to the political leaders and writers who have awakened the West from her deadly slumbers.  Citizens all over the Free World have helped to mainstream such realistic – if “politically incorrect” – thinking and have succeeded lawfully in changing government policy on multiculturalism, immigration and counter-terrorism.

Such developments terrify and infuriate the European elites – especially the radical left, academia and the media, the Islamists of the Muslim Brotherhood and the Organization of the Islamic Conference (OIC), a 57-member multinational entity that has become the largest and most powerful block in the United Nations.  They see their toehold in Europe beginning to slip thanks to the rising tide of public support for freedom.  They are determined in the wake of the mayhem in Norway to reverse this trend by demanding that Christians and conservatives be pilloried and suppressed as “Islamophobes.”

If anything, suppressing warranted alarms about the threat posed to Western civilization by shariah, and hampering legal activities aimed at staving off that menace, would simply play into the hands of the Muslim Brotherhood and their enablers.   That way lies disaster.

The murderous attacks in Norway last week cry out for justice for the victims, based on a thorough investigation of the crime and its perpetrator.  They also demand that Norway and other civilized nations respond thoughtfully – notably, by resisting the temptation to suppress those warning of encroaching shariah and, in the process, abet those who are striving to insinuate that totalitarian program into freedom-loving lands.

The tide is turning in Europe and elsewhere towards freedom, free markets and conservative values.   To paraphrase an old folk song, we can’t let a psychopathic deviant – who professes admiration for such principles and their adherents, yet utterly betrays them – to turn us around.