Trending Now
You are at:Home»Learn & Live the Faith»Apologetics»A Whale of an Argument
By Mary Kochan on January 9, 2014 Apologetics, Featured, MyChurchParish.com, Science 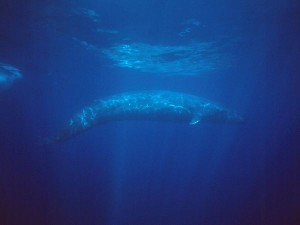 But it is, and it goes like this: You see how big the universe is. It is over a hundred billion light years across. It contains billions of galaxies with millions of stars.  And here we sit on planet Earth, circling around an insignificant and ordinary star on one spiral arm of an average galaxy. It is ludicrous to think there is something special about us, about our place in the universe, that there is a God who has some kind of purpose for our earth and for us.  Popularly, this video has recently boosted awareness of just how comparatively small our place in the physical universe is.

Yet Christians claim that the entire universe was created just so Earth would exist and so they (and you and all of us) would exist. Limited and parochial in their vision, they even claim that this planet is so special to the Creator of the universe that it has a received a visit from Him.

Let’s talk for a minute about Blue Whales. The Blue Whale is the largest animal on earth, now or ever. It is over 100 feet long and weighs nearly 200 tons. Its tongue alone is nearly 3 tons and its heart weighs over 1300 pounds. Now a human being, which is a much smaller organism, contains 10s of trillions of cells. So just imagine for a moment, how many cells exist in the body of a Blue Whale. Many hundreds of trillions, even quadrillions, of cells. Really.

Now what is the most important cell in the body of the Blue Whale? Well, according to evolutionary biology, this is very simple to answer – it is a germ cell. If your whale is a female, it is one of her eggs; if male, it is one of his sperm cells. You see, according to evolutionary biology, the entire body of the whale, with all of its quadrillions of cells, exists for one purpose, and one purpose only and that is to generate and effectively disperse (if male) its germ cells.

Now imagine for moment that the germ cell of a Blue Whale could talk and it said, “I know I look small. I know that that organ system to which I belong seems peripheral tucked down here in the bottom side of this huge beast. It doesn’t even contribute to the survival of this individual. But I’m telling you, I am what it is all about. All the other quadrillions of cells, all the other organ systems, exist only so that I might exist. They all serve me. I am what really matters here.”

Now your evolutionary biologist would agree. He wouldn’t say to the germ cell, “How self-centered and parochial you are.” Because he knows it is true. He knows that it would be silly to argue on the basis of relative size, because that has nothing to do with it. He knows that what matters here is not size, not position, but the function that the germ cell carries out – the continuation of the species.

Now if this Earth is the place, and this Solar System is the system, and this Galaxy happens to be, where the germ of life exists, then there is nothing parochial about saying that everything else  — yes, even everything else in the universe — is here for the generation of the Children of God.