Trending Now
You are at:Home»Featured»A Wholesome Image
By Fathers for Good on September 2, 2014 Featured, Parenting 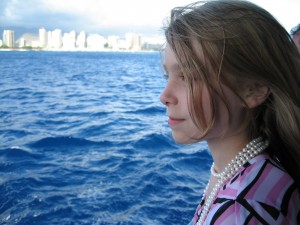 When the American Psychological Association (APA) issued a study in February 2007 on the sexualization of girls and the effects it has on them, there was hope that the report’s recommendations would lead to improvements in the culture. The study warned: “Girls learn about women’s expected roles in the world and strive to enact these expectations, because doing so brings specific rewards” and “[s]exualization and objectification undermine confidence in and comfort with one’s own body, leading to a host of negative emotional consequences, such as shame, anxiety, and even self-disgust.”

According to some experts, however, the sexualization situation isn’t much better today, and may even be worse.

According to Tim Winter, president of the Parents Television Council, “What we’re seeing now is a very disturbing trend where the age of girls being sexualized is getting younger and younger, at least as it relates to the entertainment media.”

“You have a lot of parents out there who have become desensitized,” he continued. “The irony is that we try to live in the safest neighborhoods we can, we lock our doors at night, we put our children in car seats, we give them helmets to wear when they ride their bikes … yet media is going in the opposite direction, and I think it is a consequence of the desensitization that most adults have now faced in recent years. You have a generation of parents coming onto the scene who had the internet at a very young age.”

A ‘PLAYTHING’ IMAGE OF FEMININITY

Nicole Clark, a former fashion model who directed the documentary Cover Girl Culture and serves as a spokeswoman for the Parents Television Council’s 4EveryGirl campaign, warned that girls swept up in the media’s image of femininity are at risk for a range of problems, including low self-esteem, anorexia and mental illness. They might even engage in destructive behavior like cutting their own skin “because they don’t feel good enough. They see the standard they have to live up to—this very skinny, very pretty, thin, airbrushed, photo-shopped, unrealistic image. And on top of that, they now have to be sexualized. And they don’t even understand what it is to be sexy when they’re 8 and when they’re 7 and when they’re 10.”

Girls who buy into the image end up thinking that their purpose is to be a “plaything for boys or for men, to be a physical object for society to look at versus for who they are in society,” said Clark, a new mother who travels throughout North America giving workshops on the subject to teenage girls. One girl even approached Clark at a workshop, saying, “My dad pulls me aside almost every day to tell me, ‘This is how boys at school are going to see you, honey. You need to get thinner on your waist and your hips, but your upper body is fine.’”

CAMPAIGNING FOR WHO SHE IS

What can parents do to counter the influence? Open family conversations, first of all.

“Talk to your daughters about healthy intimacy and healthy sexuality,” says Dawn Hawkins, executive director of Morality in Media. “Teach them that they’re worth something, that they’re more than their bodies, that they’re smart and they can do things. As they get older, talk to them explicitly about pornography, modesty and sexuality, using the terms that they’re going to be hearing at school or in the media.”

In this regard, eating dinner together and having regular family nights “helps kids feel more comfortable coming to them when they do face a problem or feel pressured to engage in something,” she said. “Do everything you can to help keep communication lines open.”

Content filters on computers, smartphones and televisions is good as well, but teaching children “healthy media safety” is also important, Hawkins added. “When images and inappropriate commercials appear on television we often try to ignore them and hope they won’t see it. Talk about it then. Use that opportunity to talk about what’s healthy and what’s not, what’s appropriate, what’s not. Don’t make it a lecture. Ask what they think and how they feel and use it to start a conversation.”

“Start media literacy as young as possible,” Clark advised. “We’re only going to have more and more media in our lives. I know dads want to tell their daughters, ‘You’re beautiful and your gorgeous and you’re so pretty,’ but consider using 20% or 10% on how she looks and cover her and surround her with compliments about who she is—she’s kind, she’s thoughtful, she’s funny, she’s brave, she’s strong. This will help inoculate them against what the media is going to be force-feeding them.”