Trending Now
You are at:Home»Featured»Abba
By Robert J. Gieb on April 1, 2013 Featured, Live in Christ 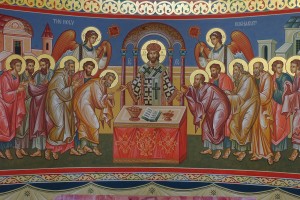 On a November morning before dawn my wife and I, and three other people on pilgrimage to the Holy Land, followed a Franciscan priest into the small edicule that surrounds Jesus’ tomb in the Church of the Holy Sepulcher in Jerusalem. The priest was going to say Mass, and he was pleased that we could join him. Two of our group went with the priest into the tomb itself, and the rest of us remained inside the edicule, just at the entrance to the tomb.

The place was consumed by the Divine Presence. The Sacred Liturgy celebrated within the simplicity of the tomb was like a magnet, drawing our souls toward the unfolding liturgical mystery. The great truths of the Faith were surely not revealed in all of their fullness, but those truths shone much more brightly. The experience was not unique to us.

We stood that morning in the same place where Peter and John had stood on that first Easter morning when they finally began to understand that He was indeed the Christ, and the Son of God come to bring eternal life. With the Resurrection their confusion turned to comprehension. The mental lights came on. They understood. His death on the cross was not the end and a failure, but a triumph and the beginning. For me, what had been preached and taught in religion classes and from pulpits before that morning, and what I thought that I understood, flashed in sharper clarity and deeper meaning.

Because of the Incarnation and salvific death of Jesus Christ, we are adopted sons of God. Just as Jesus called Peter and the other apostles each by name to come to Him and share his life, in the Sacred Liturgy as sons of God we are each personally and individually invited and welcomed into the perfect love of that Trinitarian Source. It is a foretaste now, but He promises that in due course it will be for the fullness of eternity.

This is, in fact, the reality in which we find ourselves not just present at, but deeply involved in at every Mass. The Sacred Liturgy is not a spectator sport. We are both witnesses and participants.

As happens at every Mass, standing before us as the person of Jesus Christ before the Father, the Franciscan priest prayed the Eucharistic Prayer, and at the epiclesis he invoked the power of the Holy Spirit to transform the bread and wine into the Body and Blood of his Son.  Acting as Jesus, in union with the Holy Spirit, he took the material and the earthly, and it was divinized, substantially changed from the simple bread and wine into the actual Body and Blood of Jesus there on the altar before us, just as it was in the upper room the night before he died on the cross. There we knelt, witnesses and participants in the eternal offering by Jesus of his Body and Blood, his whole being, to his Father for us.

“For now we see through a glass, darkly; but then face to face.” 1 Cor. 13:12 It was still through a glass darkly under the appearance of the consecrated bread and wine that we saw, but that November morning, at the elevation of the Body and Blood, we did come face to face with the risen Christ, at the tomb from which He rose.

The end of the Eucharistic Prayer at any Mass is a moment of great spiritual reality for all creation. It was no less at that pre-dawn Mass. The priest raised the the Body and Blood for all to see, prayed the doxology and presented the entire Eucharistic Prayer to the Father: “Through him, and with him, and in him, O God almighty Father, in the unity of the Holy Spirit, all glory and honor is yours, forever and ever.”

We then answered “Amen!” The Great Amen. It was our personal affirmation in faith of the redemption of man by the death of Jesus, but also the affirmation by the entire cosmos of the reunion of man and all creation with God. In short, what happened at that Mass and what happens at any Mass goes far beyond the church building where we may be materially present. As Pope Benedict XVI tells us “the Christian liturgy is never performed solely in the self-made world of man,” but it “is always a cosmic liturgy.”

It is at this point in the Mass when we vividly recall that just as Jesus promised us, He is indeed the way and the truth and the life. Anyone who will come to the Father must come through Him. It is He who promised that He would open the gates of heaven and that we, as His brothers and sisters, adopted children of the Father, would be permitted to come into the presence of his Father and personally address Him as Abba.

We recall as well that after our Baptism we do not exist solely in time and history, but also outside of it. The gates of heaven are open now, and we have been ushered into the precincts of heaven, even if only as a foretaste and subject to our limited faith. It is then that we understand that we are truly standing before the Father, the Supreme Being and Creator of each of us and of all else that has ever been or ever will be.

Pope Benedict wrote in his book Introduction to Christianity that while Jesus’ nearness with the Father “distinguishes his relations with God from those of all other men,” this nearness is not intended to exclude but to include the Father’s adoptive children. “It wishes to incorporate them, as it were in its own kind of attitude to God, so that with Jesus and in him they can say ‘Abba’ to God just as he does. No set distance shall separate them any longer; they are to be embraced in that intimacy which in Jesus is reality.”

In trying to understand the profundity and dimensions of this moment consider the following words by Hans Urs Von Balthasar in his book Cosmic Liturgy, on the writings and thought of Maximus The Confessor, where he describes Maximus’ vision of the universe in unified adoration before the Supreme Creator. His vision of the vastness and power of God gives us insight into the Mystery of the Sacred Liturgy, when we join with Jesus in his eternal praise and sacrifice to his Father who is completely Other, but through Jesus now completely accessible.

His ecstatic vision of a holy universe, flowing forth, wave upon wave, from the unfathomable depths of God, whose center lies always beyond the creature’s reach; his vision of a creation that realizes itself in ever more distant echoes, until it finally ebbs away at the borders of nothingness, yet which is held together, unified, and “brought home,” step by step, through the ascending unities of an awestruck love; his vision of a world dancing in the festal celebration of liturgical adoration, a single organism made up of inviolable ranks of heavenly spirits and ecclesial offices, all circling round the brilliant darkness of the central mystery-aware of the unspeakable nearness of their Source in all its radiant generosity, yet equally aware of the ever-greater distance of the “superessential,” “super-inconceivable One…”

But the “ever-greater distance” is dissolved! We are invited by Jesus through his priest acting alter Christus to directly address His Father, the Infinite Being, the “super-inconceivable one,” as our own personal Father. The “brilliant darkness” has a name and is a Person whom we may encounter through Jesus.

Our conversation is direct, and we use the very words that Jesus himself taught us to use when we talk directly to his Father, Who art in heaven.

We then go forward to meet Jesus in the Eucharist who gives Himself in the form of the divinized bread and wine, His Body and his Blood. But this Gift is not just taken in by us; it is we who are taken in by Him. This Gift which may initially seem so small, so parochial, and so earthly because of our human limitations, is nevertheless through faith revealed in all of its glorious, liberating, transcendental divinity. We who have been allowed to speak directly to His Father, to Him who is the complete Other, as our own Abba Father, are invited into the heart of the Holy Trinity itself. The Kingdom of God, and our final eternal destination. We are “embraced in that intimacy which in Jesus is reality.”

One does not encounter the risen Christ and remain unchanged. Indeed, the Resurrection has changed all creation. We are adopted children of God, and death has been defeated. A truth exemplified as we left the empty tomb after Mass.