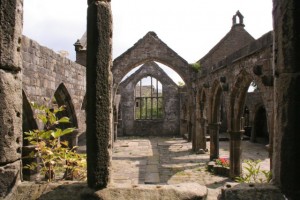 Actually, that’s the corruption of the Gaelic, “Éirinn go Brách.” The term, brách, literally translates as, “until eternity,” or “until the end of time.” This more accurate translation shows the richer Catholic soil from which the sentiment springs. It is less a temporal, here-and-now forever, as it is Ireland sharing in God’s eternity.

The share in the divine eternal as a reward for the fidelity of a nation to her Sovereign Lord and Master. How quickly it can all change.

Last week the Irish Parliament voted 127-31 to legalize some abortions, specifically for women who might otherwise commit suicide. What is stunning is the fact that 60% of the Irish people didn’t want this law, which is certain to become the first in a series leading to unrestricted abortion on demand. Equally certain will be the rise in reported cases of suicidal ideation among pregnant women on the Emerald Isle. Given the scarcity of such ideations prior to the legislation, a 5,000% increase in four years of such “ideations,” will undoubdtedly come to pass, as women will seek to save the money spent on passage to England for their abortions.

If there was always something particularly sinister about the density of English abortion clinics along the shores facing Ireland, it is even more tragic that the Irish Parliament voted so enthuisiastically in favor of beginning the process of taking over the slaughter of Irish babies from the same English who have slaughtered and oppressed them for centuries.

Central to this debate has been the assertion that abortion has become possible only because the Catholic Church has lost its hold on the people of Ireland. It is a point of agreement between both sides in this debate, albeit for different reasons.

The pro-aborts argue that the soul-shattering reports in 2009, regarding sexual abuse, have emptied the churches and cut the people off from the “control” of the clergy.

Between 1974 and 2008, Mass attendance in Ireland decreased by 50%. A good amount of this is attributable to the slow secularization of Irish society that gained steam with the prosperity of the Irish economy for the past two decades. This secularization amidst plenty has been most pronounced in the twenty and thirty-somethings. It also mirrors a similar trend in Poland. Once materialism grabs hold, babies become the mortal enemy of the “good life.”

All of this is not to say that the Church has not played a role in the run-up to last week’s tragedy. In a sense, the vote is more symptomatic than causal in nature. Abortion grabs hold when people have a sense of helplessness and hopelessness surrounding their ability to make their way in the world with a baby. That’s where the pregnancy centers become so very effective. They give the vision and provide the resources that the churches used to provide and that a largely secularized clergy no longer do.

Helplessness and Hoplessness. They are also the cardinal signs of suicide. How prophetic and ironic that suicide should have been the very issue upon which this vote hinged. A Parliament that has no sense of its own ability to offer help or hope surrendered to despair and consigned its nation to the suicide we embraced four decades ago in the U.S. Suicidal women deserve better from people who know better.

No more. Ireland’s future will become as empty as the ruins of those ancient churches that dot her landscape. They are a symbolic looking glass into a future without God, and the help and hope He freely offers us all.