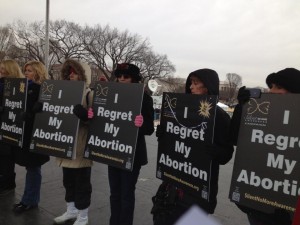 The Silent No More Awareness Campaign started in 2002 to make the public aware of the devastation abortion brings women and help them to find healing. I have been a member of Silent No More since 2008.

Recently, the Pro-Abortion movement came up with the original idea of sharing abortion stories to “break the silence” and “remove the stigma”, as seen in this Upworthy article (a mother shares “the positive” that came out of losing her disabled child in a late-term abortion) and this website dedicated to “abortion stigma busting” poetry and videos. Of course, their goal is to normalize abortion.

We often find the same elements in abortion stories. A pregnant woman perceives that she and her child are not fully supported by their loved ones and society at large. Because of a lack of emotional support, lack of money, an adverse prenatal diagnosis, etc… the woman ends up thinking that she doesn’t have any other choice but abortion.

She needs to convince herself that she is doing the right thing. She closes her eyes and tries to believe the Pro-Choice lies with all her might: that it’s not really a baby, that abortion is not a big deal, that her child is better off dead than alive.

We Pro-Life women have experienced contradictory emotions, rationalization and terrible issues caused by abortion just like our Pro-Choice sisters but we have faced the truth and moved forward.

Of course Pro-Choice women won’t talk about the physical or emotional issues they might experience. Perhaps those who had a recent abortion are not experiencing any yet but pushing human emotions in a corner is not healthy, especially when it comes to aborted motherhood. How will these women do mentally in ten or twenty years?

You can delay the truth for a while but you can’t suppress it. Anger, self-hatred, guilt, unresolved grief, these emotions are real and need to be addressed, as I’m reminded every time I debate a Pro-Choicer who had an abortion.

Women are lied to by radical feminism and the culture of death. They are told to focus on the wrong things — remove any sense of shame, impute abortion stigma to the community, to the “patriarchy”, to religions — so they don’t have to deal with the elephant in the room: that their own child was destroyed and that they need to grieve. In that aspect, sharing “positive” abortion stories is just another way to oppress women, to lock us in a mental cage of denial.

You can’t “remove” abortion stigma and shame but you can face what happened honestly and start to heal. There would be no stigma if what we call “abortion” were a beautiful, good, fulfilling life event. But as it is, abortion is a violent, destructive, demeaning, traumatic event that we (more or less freely) agree to. That’s why we feel guilt and shame. We are not whole anymore but we are told that we should be thankful because this is supposedly one of the greatest achievements of the women’s rights movement.

Abortion is not a victory, it’s a wound and a loss. The “positive abortion” movement is not telling the whole story and is not helping women. Encouraging us to pretend that nothing major happened keeps us in the darkness. Women who lost a child to abortion need to be restored and walk in the light.