Trending Now
You are at:Home»Featured»Academic Freedom, Civility, and the Name of Jesus
By Dr. Gary L. Welton on April 23, 2013 Featured 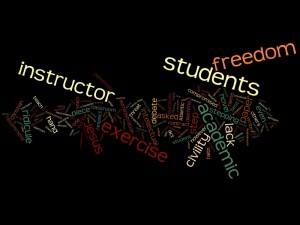 Recently, a self-proclaimed Christian instructor at Florida Atlantic University asked his students to write “Jesus” on a piece of paper and step on it. The exercise was from a textbook manual and was designed to teach that “even though symbols are arbitrary, they take on very strong and emotional meanings.” The instructor indicated that he would not have stepped on the paper if he had been asked.

Perhaps the act of stepping on a piece of paper is mundane and insipid in the 21st century. When I walk across the courtyard of the college where I teach, I step on bricks that bear the names of donors, administrators, colleagues, and students. Indeed, I even step on Christian symbols. Several decades ago when I visited St. Giles Cathedral in Edinburgh, I sought the burial marker for the reformer John Knox, but I was unable to get a clear view because of the vehicle that was parked atop it.

The act of stepping on the name of Jesus, however, is historically significant. In particular I recommend Shusaku Endo’s novel, “Silence.” In this historical novel, the author depicts a missionary’s dilemma. Is it permissible for me to step on the name of Jesus, and hence symbolically denounce my faith, when my refusal to do so will cause terror, torture, and even death on local believers in the village? I highly recommend the novel; I have read it several times.

The Florida Atlantic faculty is currently suggesting that the administration’s handling of the situation has compromised the instructor’s academic freedom. On the one hand, I agree; on the other hand, I’m not convinced.

The latest news coverage indicates that the instructor is still waiting to learn whether or not his contract is being renewed. If the administration decides not to renew his contract, on the basis of this classroom exercise, the instructor deserves a full and complete hearing. Unless due process is followed, his academic freedom has been compromised.

The exercise of a class of students being asked to write “Jesus” on a piece of paper and then stepping on it is a ridicule of religion to some, and indeed at least one student complained. Academic freedom does not give the instructor the right to ridicule a student’s faith. However, this exercise is larger than academic freedom. It is better discussed as an issue of civility.

The claims of Jesus are such that this exercise is not a threat to his dominion. Nevertheless, it communicates a lack of respect for others. Such lack of respect, when conveyed by an instructor, is a lack of civility. Demonstrating civility in the public arena is more critical than ever. The failure to do so will alienate students. Recent events in Boston suggest that some of our students may be living on the margin. We want them to see and experience the best of academic freedom and the liberal arts. When professors abuse their academic freedom, and ridicule (either explicitly or implicitly) the views of their students, their lack of civility is a disservice to our modern society.

A healthy classroom engages students in a rich debate of ideas. It should not encourage students to perform symbolic gestures that ridicule the beliefs of others. This instructor should apologize for his lack of civility and then continue his task of educating his students.