Trending Now
You are at:Home»Featured»Adopting a Mom
By Kay Anne Kelly on May 7, 2011 Featured, Women 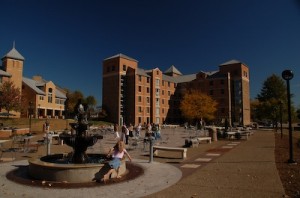 About 23 years ago I packed all my belongings into my Dad’s Suburban and drove 1500 miles from my Rocky Mountain home to live in a place I had never seen and could barely pronounce.  I had never planned to attend college – since there was no such thing as a faithful Catholic college, to my knowledge, I figured it was a giant waste of money to even bother.  Through a number of “God incidences” I found out about one solidly Catholic college:  Franciscan University of Steubenville.

After getting settled into my room and touring campus I realized just how far away from home I now was.  Two days later I stood on the hill in front of the dorm and held back tears as my parents drove away.  What had I gotten myself into?  I just moved myself across the country to a school I had never visited and in a state where I didn’t know a single soul.

After my first Sunday Mass I headed to brunch.  As I went through the line the lady behind the counter spoke up.  “Cheer up, Irish.  Once you get settled in here you will love it.  See you tomorrow.”  How did she know what I was feeling?  I guessed the freckles, green eyes and geek white skin gave away my ethnicity (or maybe it was the plaid kilt I wore!).   Her name was Anna Marie, she was a petite blond woman with a big smile and an even larger heart.

Day after day, week after week I grew to love the school I had chosen.  During that same time I was getting to know 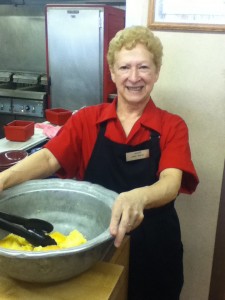 Anna Marie, too.  I referred to her as “Mom” and she called me by the nickname, Irish.  She checked up on me, made sure my grades were holding up, and let me know that one day she’d find me a nice Irish husband so I needn’t bother looking — she had it all taken care of.  Anna Marie enjoyed seeing me getting involved in campus activities, making great friends and got a kick out of the goofy things we college kids did to advertise for various campus events.

Summer after freshmen year I could not afford a plane ticket home so I stayed on campus to work.  Our boarding cost during the summer included lunch but not breakfast or dinner, all the kids who stayed tried to eat a LOT at lunch!  Most of us were working and trying to save for college tuition as well, we could not afford much for dinner.

Anna Marie must have picked up on this fact.  One day she told me to meet her behind the cafeteria after work.  When I arrived she had a stack of left over boxed lunches from the conferences going on.  Handing them to me she said, “Whenever there are leftovers I will let you know, Irish.”  She then hurried off to her car to go home.  Sharing the lunch boxes was like sharing gold.  Talk about feeding the hungry… I have never forgotten her kindness.

Getting into my sophomore and junior years Mom was a little agitated I had not been dating anyone in particular.  She knew my requirements for a future husband:  1. Had to be Catholic.  2. Had to have an Irish surname that would match my first name.  3.  Should have red hair if at all possible.

Mom teased me about dating and I would tell her I did not come to college for an MRS. Degree but she would not be deterred.  It was useful, though, on roast beef and mashed potato day since that was the only day I allowed myself 2nd or 3rds at a meal.  I explained to her, “Mom, if you really want me to get a husband you better just pile that plate high once w/ meat and taters because any guy here who sees me going back for 3rds is really going to wonder how he’ll pay to feed me for the rest of my life.  It would be much more practical to just give me ONE plate w/ THREE servings on it.  It looks more ladylike.”

Next time they served roast beef my plate was packed.  The guy behind me asked for what I had, Mom said no.  When he asked why she said plainly, “Because I know she’ll eat every bite.”  (FYI – he never asked to marry me).

Junior year there were a set of handsome red-headed twins that had transferred in.  Mom was giddy!  Surely one of them would do.  Pointing them out to me while I was in line she encouraged me to be bold and introduce myself….so I did.  It went something like this:  “Hello, my name is Kay.  My mom over there thinks one of you two would be a great husband for me.  So, how ‘bout it?”  The poor guys were speechless so I excused myself and went back to Mom.

“Not much, after I asked to marry them they were pretty much silent.”  Mom slapped my arm playfully and reprimanded me for being obnoxious.   She was sure I had spoiled her plans.  (I believe both of those boys are now priests).

Graduation was tough.  I had seen Anna Marie almost every day for 4 years.  There were many awesome teachers and professors that I had the pleasure of learning from over those years, but none touched me as much as the simple example and love of the cafeteria lady.   Little gifts on my tray for my birthday, cards when we were apart were common.

Nearing the end of senior year I approached Mom and spoke to her privately, for I had found someone I believed might one day be my husband.  She had been watching us and keeping a stern eye on him.  “He is solidly Catholic and he has an Irish last name, Irish, but he’s not a red head!”

“Mom, two out of three ain’t bad.” I explained with a grin.  She conceded.

Mom could not make the wedding a year later but we never lost touch.  Through the challenges and joys of marriage and family life she has been here for me.  We exchanged birthday cards, NFL trinkets and prayer cards through the years.

My own mother passed away suddenly a week after my son Jimmy was born in ’96; I held my father’s hand as he died when I was 3 months pregnant with my daughter, MaryKate, in 2002.  When MaryKate was born I returned home from the hospital a little sad at not being able to share this event with my own mom or dad then the phone rang, “Hello, Irish.  How are you doing?”

“Oh, Mom!  She is precious and she’s a RED HEAD!”  I cried with joy as we spoke.  To be able to use the name Mom after losing my earthly mother was a blessing beyond words.  My parents had gone, but my adopted mother never let me go.  Anna Marie embodies all that a mother should be, watching over her own but always leaving room for another.

Anna Marie still works in the cafeteria – only now I have student spies delivering things for me (At Thanksgiving – because I am so thankful for her and at Mother’s Day…of course!  And ALWAYS on St. Pat’s!).  In a couple of years my oldest, Josh, may be attending Franciscan.  How beautiful it will be to have him call and say, “There is a lady in the cafeteria who is trying to find me a wife!”

Though she may not know it Anna Marie daily lives one of St. Francis’ best known quotes: “Preach the Gospel at all times, and when necessary…use words.”  God provides so many wonderful examples of faith and womanhood in our lives, do we truly appreciate it?  The loving mother-in-law (like mine!  God rest her soul), the prayer warrior friend, and the godly women who guide and advise.   Are there Anna Marie’s in your life?  If so, Mother’s Day is a great time to let them know how much they are loved.

All she had to do was serve me a meal but she took the time to point me towards a feast.