Trending Now
You are at:Home»Columnists»Agenda Behind Botched Pledge Still a Mystery
By Marybeth Hicks on June 29, 2011 Columnists, Featured, On Media 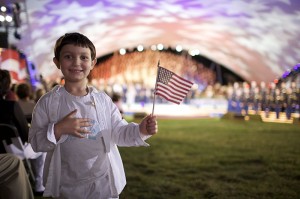 Earlier this month, NBC reminded us of the power of good television.

In the opening segment launching its coverage of the final round of the U.S. Open Golf Championship, NBC aired a stunning montage of images meant to conjure a sense of pride and patriotism for America, a nod to the tournament’s location at Congressional Country Club in Bethesda.

The montage included visuals and audio that evoke an almost visceral response on the part of freedom-loving Americans: daybreak on the Mall with clouds drifting behind the Washington Monument, the sound of military orders as Marines hoist the flag in the early morning sunshine and salute as it unfurls in the breeze, the unmistakable snapping of Old Glory waving against a brilliant blue sky.

Interspersed with this patriotic footage was video of children in a classroom reciting the Pledge of Allegiance. Talk about creative! Juxtaposing the innocence of children’s voices speaking the words of the pledge against the dramatic and intentional act of raising the colors with military precision, wordlessly communicated the message, “Our military protects us and keeps us safe.”

There was only one glitch, evident to every golf lover tuned in June 18, as well as all of the folks who have since watched the video on the Internet. The audio of the pledge – repeated during the 100-second video — was edited twice to exclude the words “under God” and “indivisible,” and on the second pass, to also exclude “one nation.”

Huh. It’s almost like NBC took those words out for a reason.

The principles of media literacy remind us that all media content is owned and produced by people with a particular point of view and a specific communication objective. No media is benign – it’s all meant to convey a message and evoke a particular response.

In the same way, media content created for the purpose of eliciting a patriotic feeling typically will include flattering depictions of our military, innocent children, elderly veterans, small-town main streets, major monuments, and the like.

To be media literate is to understand this and view media content through the lens of its creator so you know how to assess the media you’re viewing against your own values and beliefs.

NBC’s video montage for the U.S. Open was, in fact, a lovely video package meant to provoke a strong, patriotic feeling on the part of viewers. But excluding specific words from the Pledge of Allegiance also was meant to convey something to viewers. The question remains: what?

Three hours into the event’s coverage, commentator Dan Hicks, perhaps revealing the volume of calls that deluged NBC’s telephone operators, interjected into his golf riff, “It was our intent to begin the coverage of this U.S. Open Championship with a feature that captured the patriotism of our national championship being held in our nation’s capital for the third time. Regrettably, a portion of the Pledge of Allegiance that was in that feature was edited out. It was not done to upset anyone, and we’d like to apologize to those of you who were offended by it.”

Plenty of Americans were offended.

As Dan Gainor, vice president of business and culture at the Media Research Center notes, “NBC has unquestionably committed an act of religious bigotry. … Removing ‘under God’ from the Pledge of Allegiance … was absolutely not accidental. It was brazenly deliberate. NBC’s pathetic apology did nothing but compound the offense by refusing to admit what they had done.”

If political correctness was behind the editing job, someone needs to let the folks in NBC’s editing suite know that, according to a recent Gallup poll, more than 90 percent of Americans still openly believe in God and seek his protection for our country.

But if Mr. Gainor is right — that religious bigotry is the cause — NBC’s apology is hollow without consequences for the people who went out of their way to make known their disdain for the values of their fellow Americans.