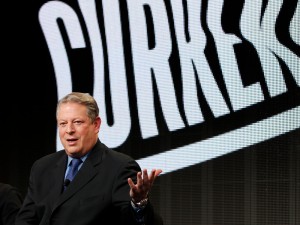 Let’s call it Al Goreera.  That seems a fitting title for the new network that former Vice President Al Gore is launching with the jihadists’ favorite television outlet: Al Jazeera.  The effect will be to create vast new opportunities for our enemies to propagandize the American people, a key ingredient of their “civilization jihad” against our country.

It is hard to overstate the magnitude of this treachery.  Imagine the furor that would have erupted if, during the Cold War, one of the United States’ most prominent former leaders had enriched himself to the tune of $100 million by giving the Soviet Union’s intelligence service, the KGB, a vehicle for engaging in information and political warfare in some 40 million homes across this land.  If anything, the danger posed by Al-Goreera today is even greater since most of us — and especially our elites — are unaware that such warfare is even afoot.

Yet it is.  In the Holy Land Foundation trial — the largest terrorism financing trial in U.S. history — the government introduced into evidence the Muslim Brotherhood’s strategic plan for its operations in America. This 1991 document, entitled “The Explanatory Memorandum on the Strategic Goal of the Group,” established that the Brothers’ mission here is “eliminating and destroying Western civilization from within…by their hands [meaning ours]and the hands of the Believers  so that God’s religion is made victorious over all other religions.”

Toward this end, Islamists like the Muslim Brotherhood employ various subversive techniques.  Among the most important are those aimed at achieving what the military calls “information dominance.”  Al Jazeera is used by jihadists the world over — including its Wahhabi owner, the Emir of Qatar — to promote their narratives of hatred of the infidel West in general, and Israel and the United States in particular.

The Washington Free Beacon recently identified (http://freebeacon.com/7-things-you-need-to-know-about-al-jazeera/) seven illustrative examples of the network’s regular dissemination of praise for terrorists and their sponsors.  These include the likes of the late Yemini-American al Qaeda leader, Anwar al-Awlaki, and Sudan’s genocidal dictator, Omar al-Bashir.  The virulently shariah-promoting, Qatari-based cleric Yousef al-Qaradawi even has a regular show on Al Jazeera’s programming for Muslim consumption.  He uses it to sanction murderous holy war against American soldiers and Israelis, including women and children.

Of course, those promoting the network’s penetration of the United States — among them Mr. Gore, who will get a board seat on the new network to be formally known as Al Jazeera America — tend to pooh-pooh concerns about the Arabic-language mother ship’s service to the jihadi cause.  In any event, these apologists insist that the programming in English is objective and fair, claiming that Colin Powell says it is the only network he watches.  Who knows, given their appalling predilections, it may also be the favorite of President Obama’s newest nominees, Defense Secretary-designate Chuck Hagel and CIA Director-designate John Brennan.

The truth, however, is that over time if not immediately, the dictates of the owner and the editorial board in Doha will ensure that the content of Al Goreera helps obscure, rather than illuminate, the ominous nature of civilization jihad and promotes the shariah doctrine it seeks to insinuate into this country.

Regrettably, the Federal Communications Commission has washed its hands of this transaction claiming, in the words of a spokesman, it “doesn’t have regulatory oversight of transactions relating to ownership of cable networks.”  It’s a safe bet that the deeply Islamist-penetrated Department of Justice (see Part 9 of www.MuslimBrotherhoodinAmerica.com) won’t intervene, either.  In light of the stakes, Congress must inject itself into the matter.

At the very least, Al Jazeera America should be obliged to register as a foreign agent.  That term is defined by the Foreign Agent Registration Act (FARA) as individuals or entities that are wholly owned by a foreign government, that take instruction from the owners or their agents and that attempt to influence public opinion and policy in America.  Al Goreera would certainly fit that description, and Congress should ensure that its broadcasts are identified accordingly.

The larger point was illuminated recently in an important essay by Jonathan Tobin at Commentary Magazine’s blog (www.commentarymagazine.com/2013/01/04/the-al-jazeera-liberals-al-gore/):  “The real issue here is not a false argument about diversity [in the U.S. media]. It is instead one about what it means to be a liberal in today’s media environment….Gore refused to sell his channel to conservative Glenn Beck saying that he didn’t wish to see his vanity project fall into the hands of those who disagreed with his politics. Fair enough. But the fact that Gore sees Al Jazeera as a good match for his brand of American liberalism speaks volumes about the nature of that set of beliefs.”

With his spawning of Al Goreera, the former Vice President has offered proof positive of the Left’s readiness tomake common cause with our enemies. Al Gore and his ilk must be held accountable — not just for the affinity they feel for jihadists, but for enabling the latters’ undermining of America. For a man who was once a heartbeat and then some 500 votes away from the presidency to enrich himself by selling out his country in this fashion is not just contemptible.  It is a threat to the national security.