Trending Now
You are at:Home»Featured»Alcohol, Patriotism, and the NFL: The Best Hope for Tailgaters
By Lee Wishing on December 18, 2013 Featured, The Social Order 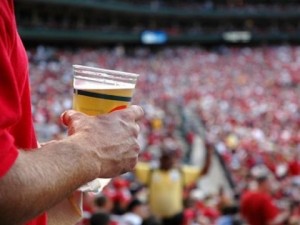 I was disturbed at what I recently witnessed at a Buffalo Bills football game. The Bills hosted their cross-state rival, the New York Jets, in Orchard Park, N.Y. I had attended many Bills games years ago, but this was different. The young fans seemed hopeless, yet searching for hope.

My father had owned season tickets to the Buffalo Bills for about 20 years after the opening of Rich Stadium – now Ralph Wilson Stadium – in 1973, and I often attended games with him. My parents were accomplished tailgaters who welcomed friends to celebrate at their camper before, during, and after the game. The joyful pregame atmosphere was accented by people tossing footballs, blaring music, red and blue everything (the Bills’ colors), and the tantalizing smell of grilled meats.

But it was different this time, many years later. Everywhere we looked, my 18-year-old son, my brother, and I saw drunken youth and the crude expressions of their woozy state of mind.

“I hope you get raped!” yelled a 20-something woman to another 20-something female who was wearing a Jets jersey. A few minutes later, the yeller entered the old motorhome next to us and pressed her nose against a window. She laughed when we noticed her odd porcine greeting.

Thirty yards away, a drunken, bare-chested, obese young man stood on the bed of a flatbed truck waving a giant Bills flag with his right hand while downing yet another beer with his left hand at 10:30 a.m. He was accompanied by a friend wearing a Bills jersey waving an equally large American flag. After snapping a photo of this freakish expression of parochial pride and patriotism, another young man turned around to display the back of his T-shirt, which proclaimed that I could kiss his backside if I was incapable of urinating in red and blue. Avoiding conflict, I signaled my appreciation for his enhanced renal functioning with a thumbs-up and a “Go Bills!” Satisfied, he returned to his pack of revelers.

After having a few bowls of our host’s special chili, we made our way to the stadium surrounded by throngs of young people in a drunken stupor. Entering the stadium, we saw several signs stating that “the Ralph” is a smoke-free stadium. We noted the irony of Erie County’s concern for its football patrons’ respiratory health while immersed in a human sea of insobriety.

We took our seats in the upper deck. Again, omnipresent drunkenness. I spoke with a happy young couple with glazed-over eyes throughout the game. Another pleasant young couple cheering for the Jets was comfortably numb for four quarters. A few sections away, an inebriated young man slid down the wall at the end of the upper deck and fell backward 40 feet to the lower level. His employer fired him the following day after seeing the viral replay. Later in the game, another disturbance broke out. A man with the bloodiest face I’ve ever seen emerged from the crowd escorted by Bills security.

As I looked across the stadium to where my father and his best friend used to sit – first row upper deck, 50-yard line – I recalled the days when going to the stadium was, well, different. Sure, there was the occasional rowdy fan, the sloppy drunk, and the docile intoxicated observer but the stadium wasn’t filled with them.

There was one moment that reminded me of the old days. At the beginning of the game, members of the military unrolled an American flag that covered the entire football field and everyone stood to sing the National Anthem respectfully, almost reverently.

Later, the Buffalo Bills cheerleaders, the Jills, performed a dance number wearing military boots, camouflage pants, and skintight black shirts. They ended the routine doing a split and saluting the crowd. The fans went wild for this contemporary sexualized patriotic display. It was as if Beyoncé was about to appear and do a USO show. But still, it was a form of patriotism and my mind flashed back to the flag-waving guys in the back of the truck. Was there a connection, a common thread? Although the Bills were victorious, the day was defined by youthful drunkenness and patriotism. But was there more underlying this unsettling culture?

Although I left the stadium disturbed, I’m hopeful because I think the drunken youth were searching for a reason to be happy and hopeful. That’s good. Although the NFL season will end soon, this is the season of hope when we celebrate the birth of a child, the joy of man’s desiring, the desire of all nations and the prince of peace upon whose shoulders rests a government that will increase forever. This is the best hope for young and old tailgaters.