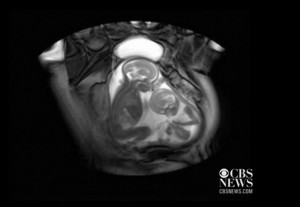 Any Internet sensation—even if it colorfully overinterprets what is taking place—that further clarifies how child-like the unborn child is will always be welcomed. Enter “Twins fighting in the womb,” actually better described as two babies, approximately 20 weeks old, attempting to stake out additional leg room in cramped quarters.

Reuters put it nicely: “It’s a womb with a view….a unique view of a twin pregnancy. The images were made possible by a recently developed cine-MRI scan used by clinicians at London’s Center for Fetal Care.”

The new MRI [also dubbed the “cinematic MRI”]is being used by doctors  to diagnose how twins are affected by twin-to-twin transfusion syndrome. TTTS is rare and potentially lethal and occurs only in identical twins where blood from one baby moves into the other. In TTTS one sibling, called the recipient, takes too much blood from the other–the “donor twin”–who can suffer stunted growth as a result.

“We use [the cine]MRI in twin-to-twin transfusion syndrome, not so much for diagnosing it, which can effectively be done on ultrasound but more for looking at the consequences of it… So one of the problems with the imbalances of blood flow is that if you get a sudden shift of blood from one twin to the other, that can cause brain injury, so it can cause stroke or hemorrhage in one or both of the twins’ brains. MRI can pick up signs of brain injury much earlier and in much greater detail than ultrasound can at the moment.”

“Although conventional ultrasound detects the syndrome, MRI scans pinpoint signs of brain injury earlier and in more detail, allowing treatment to be better targeted,” Reuters adds. She has used the technique on 24 sets of twins.

How “cinematic MRI” working is fascinating and highly technical. In a nutshell, according to New Scientist, “Whereas conventional MRI takes snapshots of thin slices of the body as it penetrates through it, so-called cinematic-MRI takes repeated images of the same slice, then stitches them together to create a video. This means that a moving structure such as a fetus–or several fetuses–can be visualized in unprecedented detail.”

Taylor-Clarke added further detail: “A lot of the so-called videos in the womb are very processed, so they do a lot of reconstructing and computer work afterwards. These are the raw images that are acquired immediately.”

Taylor-Clarke cautioned that the technique  should not be used in routine pregnancies. “We may pick up conditions that we couldn’t interpret,  which may be very stressful for women.”