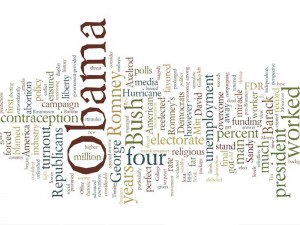 Timing is everything in politics. For four years, I angered conservatives by insisting Barack Obama would get reelected. I figured that an electorate willing to elect a man with ideas and a record that far to the left in 2008 would do so again. I began changing my view, however, after the first presidential debate. Over the last three or four weeks, I became confident that Mitt Romney would defeat Obama.

Fortunately for Obama, two forces intervened to rescue him. One was the mainstream media, which ensured that Benghazi, Hurricane Sandy, and the increase in the unemployment rate wouldn’t be used to undermine Obama. As for Hurricane Sandy, Obama flew in for a photo-op and then immediately returned to campaigning. If George W. Bush were president, a relentless media would have ensured that Bush didn’t return to the campaign trail.

The second force was David Axelrod and the campaign machine. I stand in awe at what they pulled off. They managed to push considerably more Democrats than Republicans to the polls (38-32 percent margin), closer to the 2008 turnout that favored Obama than the 2010 mid-term turnout that favored Republicans. Because they did, the predictions of an easy Romney victory by the likes of Dick Morris, Michael Barone, George Will, and Newt Gingrich (and myself) were dead wrong. We were certain that pollsters were oversampling Democrats. The pro-Republican, pro-Romney, and anti-Obama enthusiasm we were seeing was extremely intense. It was inconceivable to us that it could be overcome by a higher Democrat turnout. Somehow, however, it was, obliterating Romney’s five-point victory among independents. It erased Romney’s 50-49 percent edge in the final polls by Gallup and Rasmussen.

I stand in stunned disbelief. David Axelrod, you are a miracle worker.

How much of a miracle worker? Consider:

The American people reelected a man who presided over one of the worst four-year economic records in American history. By every objective measurement, the economy is far worse than four years ago: 47 million on food stamps (up from 32 million); all-time record deficits and debit (dwarfing the Bush numbers); chronic unemployment; a prolonged non-recovering recovery; 636,000 homeless; a doubling of gas prices; and on and on.

For historical perspective, consider this: No president since FDR in 1940 won reelection with an unemployment rate above 7.1 percent. And for FDR, that number was a huge improvement from four years earlier.

How did Obama and his team overcome this? The answer: they successfully blamed it on George W. Bush, with Bill Clinton aiding and abetting the process. There were no limits to how much they blamed Bush, and how much it worked. The Democratic base swallowed it hook, line, and sinker.

Sadly, other things worked as well, and none are good for this country. The framing of Republicans as conducting a “war on women” because they don’t favor forced taxpayer funding of abortion, Planned Parenthood, and contraception worked. The insistence that government-provided contraception is a new “entitlement” worked. The demonization of the Tea Party—a movement spontaneously created by Obama’s wild spending—worked.

For that matter, Obama got away with the extraordinarily wasteful $800 billon “stimulus” package that didn’t stimulate and buried us fiscally. He even got away with the HHS mandate that constitutes the greatest threat to religious liberty (particularly against the Catholic Church) in at least a century.

In terms of social policy, the electorate has given the green light to a president who is redefining marriage and promoting forced funding of abortion and contraception and embryo destruction—at the expense of religious liberty.

Moreover, the president’s unceasing class-warfare rhetoric was rewarded by the electorate, as were his attacks on profits, the private sector, the wealthy, banking and investment, and the oil and natural gas industry. The Obama energy policy is advanced. Mitt Romney would have unleashed a boom for America’s domestic energy industry. That is now gone. That is a tragedy, the levels of which we will not be able to appreciate.

And what about Romney? I had my reservations, but America rejected a genuinely decent man who had the best business background of anyone who would have ever assumed the Oval Office. He was the perfect person for the perfect time.

In short, what we saw on November 6, 2012 was a breathtaking display of political survival by Barack Obama, the first president to be re-elected with a lower number of Electoral College votes and popular vote. What we also witnessed was the final step in the fundamental transformation of America that Barack Obama promised four years ago.