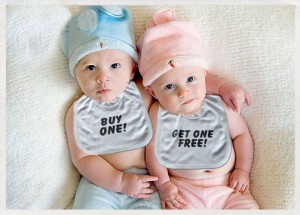 Yup, it’s them again. America’s most charming couple is back in the news.

You remember, don’t you? We were introduced back in May when Albert Garland (a pseudonym), published a piece on Babble with the charming sub-headline: “My wife’s expecting twins — and I’m not happy about it.”

Things only went downhill from there.

Well, apparently the reaction to Albert’s piece was less than positive (who knew?), and now his wife has stepped forward to tell her side of the story in a follow-up piece on Babble.

“Mrs. Albert Garland” patiently explains, in their defense, that she and her husband only ordered one child (they got pregnant through IVF), and it’s really, really unfair that they got two. And just to be perfectly clear, they’re really (really) not happy about it!

“The twins are coming fast, and I don’t feel a sense of joy. Instead, I feel responsible. We only wanted one,” she writes. (Did I mention how charming this couple is?)

She goes on to wonder how much “strain” having two more children will place on her marriage and her older son, and explains that “like any family” they have dreams of “going to Disney, college, etc.” and are worried that now they will need a bigger car and a bigger house.

“Now, seven months into my pregnancy — and in therapy — I still feel remorse and am terrified of our future,” she writes. “When I chose to plant both embryos, I made a decision that forever impacted our lives, and not necessarily for the better.” (There’s that charm again.)

“In my mind I had done nothing less than ruin our family,” she confesses.

To be fair, Mrs. Garland does paint a picture of a legitimately difficult pregnancy. Carrying twins is a very challenging thing for any mother, and it would take a very remarkable woman not to sometimes get down and a little discouraged during the process. Add onto that the fact that the couple’s first son had colic, and you can begin to understand why the couple may feel daunted at the prospect of twins.

But what this doesn’t excuse is the choice to pen, and then publish in the public forum, a pair of such ridiculous articles. In the trials of their pregnancy, Mr. and Mrs. Garland may be excused for seeking pity and support – but it should be the pity and the support of each other, and of their close family and friends. What they hope to accomplish by airing their purile grievances for the world is unclear, except to re-affirm all of the most pernicious popular fallacies about parenthood.

Indeed, what is so fascinating about this story is that it illustrates, in a nutshell, how just about everything that the modern world teaches us about parenthood, pregnancy and childbirth – all that stuff about “control” and “choice” and “responsible parenthood” and “self-realization” – is absolute rubbish, and, rather than making us free and happy (as promised), leads only to misery and a truly breathtaking narcissism.

But that’s not how it works. When you get married, when you have sex, when you open yourself up to the possibility of children, you are opening up a Pandora’s box. You are opening yourself up to life. And life is not within our control. It is way bigger and more mysterious than our pet plans. Get all the scientists and screening technologies involved that you want. It doesn’t matter. The only proper approach to parenthood is to simply open your heart and accept whatever comes as a gratuitous gift from God.

To become a parent is inherently to stretch ourselves. And if we sit back and allow ourselves to be stretched, we will find that our hearts are bigger than we ever knew. But if we hold on to our hearts, and say that they will stretch this much and no more, we only cause ourselves pain. And we will sink into self-pity.

To their credit (and I mean that sincerely), one big difference between the Garlands and millions of other couples around the globe in similar circumstances, is that when the Garlands found out that they were getting a child that they didn’t order, they found that they couldn’t stomach the notion of aborting that unwanted child. And for all of the jaw-dropping one-liners in their infuriating articles, we should at least give them credit for choosing life.

For that, of course, is exactly where all this talk of “control” has brought us – to more than 50 million aborted babies in the United States alone. To some 50 million heartbroken, spiritually scarred, empty-armed mothers and fathers, who believed that they could have their cake and eat it too, and who chose murder when, inconveniently, that didn’t turn out to be true.

Love does not seek to control. Love opens its arms and embraces. Love finds a way. By treating our children as a commodity to be bought and sold, when, where, and however we wish, we have closed our hearts to the spontaneity of love. And in so doing we have locked ourselves inside the narrow boxes of our own petty egos and desires.

If the Garlands would simply let go of that illusion of control, which has been hammered into them by the contraceptive, pro-abortion, “planned parenthood,” self-oriented culture, they would find the freedom to embrace their circumstances, to come out of themselves, and to find hope even in their most difficult moments.

They would see that going to Disneyland is not an important part of being a family; that you don’t need a large house to love three children;  that while pregnancy is difficult, it is a difficulty with immense rewards; and that all of the hardships of parenthood are oriented towards one of the greatest things any human being can ever do – bring new life into the world.

This doesn’t mean that pregnancy won’t be hard. That having twins won’t be hard. But what it does mean is that even within the hardships, they will find their happiness and their joy.

The most hopeful part of Mrs. Garland’s article is the last line: “For anyone who is worried about me and my husband, our son brings us a ton of joy. We are always amazed by how much we love him, and I’m sure this indescribable love will extend to his brothers. But for now, I’m having trouble seeing the light at the end of the tunnel.”

In the midst of challenges and uncertainty and suffering it can be hard to see the light at the end of the tunnel. But fortunately for the Garlands, because they had a sufficient moral sense to reject abortion, they will be given the opportunity to see that light – to welcome their two children, and to learn how to love them as the treasures that they undoubtedly are.

And hopefully whenever (if ever) they unintentionally become pregant again, they will have learned their lesson, and won’t write any more such ridiculous articles for ridiculous publications.