Trending Now
You are at:Home»Featured»An Excerpt from The Summer of 43: R.A. Dickey’s Knuckleball and the Redemption of America’s Game
By Joseph Bottum on July 10, 2012 Featured, Sports 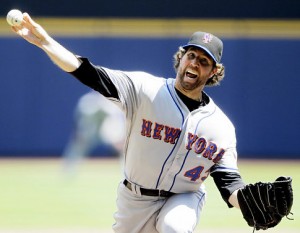 A fastball is a young man’s pitch. Arrogant and overpowering. An exercise in green strength and the flexibility of young bones and tendons. Oh, older pitchers can sometimes throw the high-velocity things, barreling toward the plate at more than 90 miles an hour. Even in his last seasons, a forty-year-old man playing in the early 1990s for the Texas Rangers, the Hall of Fame-bound Nolan Ryan would rear back in his windup—stretching toward second base as though he were reaching behind himself for a piece of the past, for a portion of the terrifying power pitcher he had been in 1973—and burn a fastball over the plate at 98 miles an hour.

But the young Aroldis Chapman, throwing for the Cincinnati Reds, is more like what we imagine a fastball pitcher to be: When a radar gun in 2011 recorded the twenty-three year-old hurling the hardest pitch in baseball, a 106 mile-an-hour bolt of lightning, he promptly went out and bought a vanity license plate that read “Mr. 106.” To put on his Lamborghini, of course.

It’s a fun game to play, if a little silly: this sorting of pitches into their moral categories. If a fastball belongs to the vanity and power of youth, then maybe a changeup comes from the magician’s guild, all sleight of hand and trickery, while a curveball is an artist’s pitch: When Sandy Koufax threw that powerful fastball he had in the mid-1960s, he was trying to blow past the batters he faced; when he threw his curve, he was trying to sculpt Michelangelo’s David.

As for the slider, with its hard cut across the strike zone, I’ve always thought of that sinister pitch as something the devil might throw. “Why do you think you were put on this earth?” an interviewer once asked Steve Carleton. “To teach people how to throw the slider,” he answered with a wicked smile—and there is, in truth, something a little eerie about that 1972 season he had for the Phillies, arguably the greatest pitching performance in the history of baseball, when he won 27 games for a last-place team that finished the year with only 59 wins: with only 32 victories that Steve Carleton didn’t go out and get for them.

And then, at last, comes the knuckleball, which is . . . well, what is it, that strange wobbly pitch? A-Dieu-va, French sailors used to call out as the command to bring their wooden ships about—a more difficult maneuver than you might think, turning one of those old high-masted vessels and hoping it had enough momentum to swing it through the eye of wind and over onto a new tack. A-Dieu-va: We must take the chance, the phrase came to mean in ordinary French, and trust to God.

The throwing of a knuckleball has something of the same quality about it. You grip the ball with your fingernails, lean back, and push it toward the batter, across the eye of the plate. And then you wait to see what happens. Sometimes it just floats, a slow, easy pitch any good hitter will crush into the bleachers. Sometimes it drops suddenly, as though it had rolled off the edge of a table, batters swinging futilely a foot above it. Sometimes it flutters like a sail taken aback. Nobody knows what will happen, not the pitcher or the hitter. Not even the catcher who had signaled for the pitch: “You don’t catch the knuckleball,” Joe Torre once famously complained, speaking for long-suffering catchers everywhere. “You defend against it.”

Of all pitches, the knuckleball seems the most determined to collect this kind of aphorism. “You live and die with it, and hopefully, you don’t die too much,” said the 1990s knuckleballer Dennis Springer, before his career in major-league baseball flickered out with a 24–48 record and an earned-run average of 5.18. The knuckleball, added the great sportswriter Jimmy Cannon, is “a curve ball that doesn’t give a damn.” After the Yankees played an interleague game against the Mets this year—which they won, keeping the Mets’ star knuckleballer R.A. Dickey from gaining another victory—the Yankees’ Nick Swisher told the New York Times that batting against Dickey is like “eating soup with a fork.”

Among those often-quoted, well-rehearsed lines about the knuckleball, one of Bob Uecker’s many takes is my favorite. Not the one where he named the best way to catch it (“Wait till it stops rolling, then go pick it up”), good though that line is. No, my favorite is when he described crouching behind home plate to catch a knuckleball strikeout: “Phil Niekro struck out a hitter once, and I never touched the ball. It hit me in the shin guard, bounced out to Clete Boyer at third base, and he threw out the runner at first. Talk about a weird assist: 2–5–3 on a strikeout.”

I think I like that Uecker story because it captures the sheer uncertainty of the pitch: its unknowable quality and its air of being something even the pitcher is standing back to watch. He shapes the knuckleball as best he can, rough-hews it as he will, but in the end he has to let it fly and see what happens.

The Summer of 43, let’s call it—this summer of 2012, for here in the midst of our current season, the Mets’ R.A. Dickey, wearing number 43 on his uniform, has emerged as one of the premier pitchers in baseball: the first genuinely successful knuckleballer since Tim Wakefield came up as a rookie with the Pirates in 1992. And what Dickey has done is let us see that strange pitch in action, once again. What he’s done, really, is remind us that a fastball is a power pitch. A curveball is an artist’s pitch. And a knuckleball—ah, yes, a knuckleball is a pitch of faith. A-Dieu-va: We must take the chance and trust