Trending Now
You are at:Home»Columnists»An Inhuman Economic System
By Russell Shaw on November 17, 2012 Columnists, Featured, On the Job, The Economy 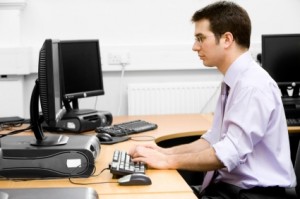 If someone is looking for material for a book with a title like Profiles of an Inhuman Economic System, consider what follows to be a contribution to the cause. It’s about a man I know whom I’ll call Joe. His wife told me his story.

Joe is an honest, conscientious guy who, a couple of years out of school, went to work for a very large, nationally known company. He wasn’t exactly crazy about his job, and after a while he became aware that the company was systematically extending preferment to women and minorities, while people like himself—ordinary white guys, that is—got short shrift. But by then he was vested in the retirement plan, so he kept on conscientiously doing his work.

Recently, after 28 years, he was let go with little notice and no severance. His performance was satisfactory—otherwise, he wouldn’t have lasted nearly three decades. The problem evidently lay somewhere else—age and money, to be precise.

Joe is in his early 50s. The company is well aware that it can get somebody 25 years younger to do essentially the same work while costing it a great deal less in salary and health benefits. So, at an impossible age and in a dreadful job market, Joe was heartlessly canned.

His wife says that with hindsight you could see it coming for a long time. She traced what happened to her husband back to the era some years ago when the company went public and acquired stockholders. That’s when radical change set in. From there on out, she told me, the company managers had three priorities: money, money, and money. People didn’t count for much any more.

Lately, too (I’m still quoting the wife), Joe’s supervisor had begun setting standards of performance and productivity for him that others weren’t required to meet. Once again, hindsight may shed light on that: the company apparently was protecting itself against the possibility of an age discrimination lawsuit. If it found itself in court with Joe, its lawyers could say, “What do you mean, age discrimination? The problem wasn’t age it was job performance. See for yourself—it’s all right there in the personnel file.”

And so, in his 50s and with unemployment nationally pushing 8%, Joe is stranded high and dry, out of work and looking for a job. He’s getting unemployment, and his wife says she has plenty for him to do around the house. But when all the chores are done and unemployment runs out—what then? Joe has a lot of years ahead to fill.

Fortunately, his wife has a job that pays well and will keep them afloat. But if what happened to her husband happens to her, these people will be in serious trouble faster than you can say, “Food stamps.”

There’s a principle of social doctrine saying that the economy is for people, not people for the economy, but companies like this one have it the other way around. Blessed John Paul II in his encyclical Centesimus Annus speaks of situations where a firm is doing well financially but the human beings who are its “most valuable asset” are “humiliated and their dignity offended.” Rapacious and inhumane employers like Joe’s employer fit that description to a tee.

The advantages of our free market system are very real, but an incident like this one shows how people can and do get hurt. If those who benefit most from the market won’t regulate it and themselves, then—unfortunately–government must.