Trending Now
You are at:Home»Featured»An Interview with War Horse Star Jeremy Irvine
By Peggy Bowes on December 22, 2011 Featured, On TV and Movies 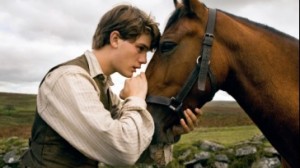 War Horse is an epic film about the love between a young English boy named Albert and his horse Joey against the backdrop of World War I.  The film stars Hollywood newcomer Jeremy Irvine, who was discovered by director Steven Spielberg.  “I wanted a fresh face.  We were right in the middle of the search process when we saw Jeremy.   We moved on to see if anybody could match him.  After several more months of searching, it was clear he was the best person for the part.”

I recently screened the film and was impressed with Jeremy’s performance.  He brings depth to the character of Albert, exuding boyish charm and enthusiasm as well as courage, dignity and honor.  I was able to sit down with the 21 year-old actor to talk about the movie and his ambitions in Hollywood.  He was refreshingly humble, personable and candid.

Peggy Bowes:  You were first introduced to War Horse when your mother read the book aloud to you as a child, and two of your great grandfathers fought in World War I.  Do you feel a personal connection to this story?

Jeremy Irvine:  I was 8 or 9 at the time.  It’s a story that is fast becoming part of our culture in Britain.  The book is read by many children.  Michael Morpurgo was the children’s laureate— he’s been honored to be the main children’s writer.  The First World War is such a bruise on our society.  The fact that I have stories of both my great grandparents in the First World War is not extraordinary.  Nearly everyone does.  It’s something that literally affected everyone in Britain.  What is extraordinary is that my great grandfather had a horse, Elizabeth, in World War I that he bought from the army for 28 pounds– the same amount Albert has when he tries to buy Joey from the army.  I’ve got the receipt for the horse, and I read his letters.  I think it’s difficult for my generation to relate to what these young boys and men must have gone through, which just makes it more important that films like this keep that memory alive.

Peggy:  How else did you prepare for the role?

Jeremy:  I’ve always been fascinated by the First World War. It’s kind of geeky, but I collect war memorabilia.  I think where I found an outlet was the innocence Albert has— it’s an innocence we don’t really have nowadays.  To find a fifteen-year-old with that lack of cynicism is very rare.  He’s been in this isolated part of England, not really seeing anyone outside his small community.  He’s got no brothers or sisters nor many friends at all, and this horse becomes his brother and his best friend.  That’s why the stakes are so high.  When the horse is taken away from him, he has to go and find it.  There’s no question in Albert’s mind.

Peggy:  The horse who played Joey stepped on your foot at one point.  How did that affect your performance?

Jeremy:  It was in the audition!  I’m really desperate to impress, and the horse is standing on my foot.  The tears in that audition were very real.  Purely my fault, however.  I was too busy with my scene rather than looking where I was putting my feet.  The horse wasn’t to blame.

Peggy:  More and more children are affected by diabetes these days.  What are the challenges of being a diabetic actor in Hollywood?

Jeremy:  I’ve been diabetic since I was six.  It’s just part of my life.  I don’t let it affect me in any way whatsoever.  If you treat it with respect and you’re sensible, it shouldn’t stop you from doing anything.  Sure, some days it’s a lot harder to work, but the moment you start complaining about that and letting it affect your work, then that’s the moment it starts affecting your life.  I just tend to think that if I have to work a little bit harder today, then I’ve just got to work harder.  The research that is being done now is so incredible.  I do some work with the Juvenile Diabetes Foundation.  Diabetes is one of these things that something can really be done about and very soon.

Peggy:  Since you’re a newcomer, there’s not much information available about you.  I did find your Facebook fan page and read that you’re a very accomplished musician and that you especially enjoy playing the saxophone.

Jeremy:  [Laughs loudly] That’s all bollocks [nonsense]!  I’m sorry.  No, no, no that’s the risk of reading things on the internet.  Absolutely not.  I’ve never touched a saxophone.  They say lots of things, apparently.  My brother came to me the other day and said, “Jeremy I never knew you sang to the pope.”  The internet is a wonderful invention, but anyone can write whatever they want.

Peggy:  Well then, since you’re a fresh young face in Hollywood, what do you want to be known for?

Jeremy:  I have a very, very strong idea of the scripts that I like.  I like to choose scripts based on my being passionate about them.  They’re all good proper scripts [War Horse, Now is Good, Great Expectations and The Railway Man].  I’ve been asked a couple of times while doing the press for War Horse, “What are your thoughts about fame?”  It sounds stupid now, but when I took the role, I never really contemplated it.  I want to be known for doing good work, I hope.  Just being able to work is a privilege enough.

War Horse opens in theaters on December 25th.   The film is rated PG-13 for intense sequences of war violence.