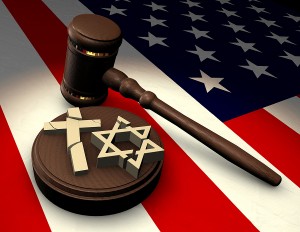 Unless you’ve been living under a rock for the past month, you’re undoubtedly familiar with the controversy surrounding Indiana’s “religious freedom” law. Debates on this issue ultimately boil down to a question of liberty v. justice.

Christian business owners invoke their First Amendment right to exercise their conscience when it comes to whose patronage they accept. Gay rights advocates insist that a just society cannot be one in which individuals decline to accept business from a customer based on their sexual orientation and corresponding lifestyle choices.

I’ll not be the first Christian conservative to observe that our side is losing the culture war on this one. At this point, anything less than a positive celebration and wholesale embrace of homosexuality and other alternative sexual identities is condemned as rank bigotry and hate-mongering. To gay rights activists, the differences between Fred Phelps and Crystal O’Connor are negligible, merely different points on the spectrum of homophobia and intolerance.

This is understandable. To most Progressive-minded people, including homosexuals, there is no justification for such behavior, and any religion that views homosexual love as an illegitimate or disordered form of human eros cannot be a good one. Such people view Christianity (certainly not the only religion with orthodox views on human sexuality but for some reason the one that gets most of the attention when it comes to these kinds of issues) as a positive threat to society – a barrier to social and cultural progress.

To paraphrase a gay relative of mine, “more and more people are coming to reject organized religion and the morality that goes with it, and in my mind this can’t happen fast enough. The world will be a better place when religion is relegated to the ash bin of history.”

Christians have tried, and continue to try, to distinguish between loving their neighbor and disagreeing with their neighbor’s lifestyle, but the whole, “love the sinner, hate the sin” tends to ring hollow when the sin in question involves another person’s private life and personal relationships, and how those relationships are recognized, or not, by society.

There can be no denying that it’s a difficult principle to defend. How can a religion that preaches “love thy neighbor” and “thou shalt not judge” also be one that would refuse to celebrate the love two men or two women feel towards one another?

It occurred to me last week that the Easter story has much to reveal on this point, particularly an exchange that occurred in the final agonizing hours of Christ’s life. Shortly before declaring, “It is finished,” and giving up his spirit to God, Christ speaks with one of his fellow crucified, promising him that he would join him in Paradise that very day. In a Good Friday piece for Ethika Politika, Michael Bradley tells the story of the “good thief,” or St. Dismas:

“We know that both thieves mocked Christ as they hung on Calvary. Mark reports that ‘those who were crucified with him also kept abusing him’ (15:32), and Matthew reports the same (27:44). The crowds and priests were tempting Christ to take himself down off the cross, challenging him to ‘make good’ on his blasphemous presumptions. Were the thieves doing the same? Were they taunting Christ, not unlike Satan in the desert, to demonstrate his mighty power? Yet Christ’s silence conveys what he had promised earlier: ‘An evil and unfaithful generation seeks a sign, but no sign will be given it except the sign of Jonah the prophet’ (Mt 12:39), referring to his own three-day descent into darkness.

[Then], remarkably, the second thief evidently experiences a change of heart. Remember that he too had been ‘abusing’ Christ. But now he chastises his former compatriot – his former fellow visionary, a friend and conspirator with whom he had bonded as they plotted their uprising, reveling in the close intimacy of partners who are convicted of the goodness of their cause and for whom death is preferable to maintenance of the status quo. The good thief ‘rebukes’ his former partner, saying: ‘Have you no fear of God, for you are subject to the same condemnation? And indeed, we have been condemned justly, for the sentence we received corresponds to our crimes, but this man has done nothing criminal.’ Then he says, ‘Jesus, remember me when you come into your kingdom’ (Lk 23:40-42).

Heretofore Christ is not recorded as having responded to either the crowd or the bad thief. But he turns instantly to the good thief and engages him directly. ‘Today you will be with me in Paradise.’

[We] might identify with St. Dismas. Like him, we stubbornly entrench ourselves in our sins, knowing but not admitting that acknowledging them and the justice of their repercussions entails a humble turn: conversion. The bad thief is not yet willing to face the music; even as he hangs dying, he is focused on his own self-preservation. He equates his situation with the innocent man’s beside him: ‘We’re not really different, him and me.’ He will not admit that ‘the game is up,’ the game of his inverted self-love.

The good thief was the same way – for a time. But something changed. Perhaps he noticed Christ’s silence in the face of the mockery, the spitting, the lewd soldiers casting lots for his garments. Perhaps he was struck by that silence, just as it perturbed an uneasy Pilate and enraged Caiaphas. Perhaps he had been coaxed into the revolution in the first place, and only needed the good example of one witness to shake him from his sinful stupor.”

The 11th hour conversion of St. Dismas may not seem relevant to gay weddings in Indiana, but for those truly interested to understand the crux of the Christian faith it is critical. Christianity, ultimately, is not about moralism, judgment, or pride, as much as it may appear to outsiders and as often as its followers might display them. Christianity is a religion of humiliation and brokenness followed by reconciliation and restoration – a tragicomedy of cosmic proportions.

We can only assume that in his final moments of life, St. Dismas perceived the depth of his badness and the infinite heights of Christ’s goodness. In the end, there was no room left for pride or spite or bitterness. There was only room for faith and hope, and a plea for forgiveness.

C.S. Lewis articulates the kind of transformation that likely occurred with St. Dismas in The Problem of Pain:

“When we merely say that we are bad, the ‘wrath’ of God seems a barbarous doctrine; as soon as we perceive our badness, it appears inevitable, a mere corollary from God’s goodness. To keep ever before us the insight derived from such a moment as I have been describing, to learn to detect the same real inexcusable corruption under more and more of its complex disguises, is therefore indispensable to a real understanding of the Christian faith. This is not, of course, a new doctrine. I am attempting nothing very splendid in this chapter. I am merely trying to get my reader (and, still more, myself) over a pons asinorum – to take the first step out of fools’ paradise and utter illusion.”

Ideally, each and every Christian has experienced this humiliating revelation about themselves. And after such an experience, I assure you there is no room left for superiority or judgment of others. Merely dealing with one’s own deficiencies in the face of our Savior’s perfect love is a full time job. However, as Christians, we are bound by our faith to bear witness at all times and in all places to the truth as we understand it – as revealed in Scripture and affirmed by the natural law.

We must bear witness even when it means we are branded as villains and mocked as bigots. We must remain faithful even in the face of threats and even when it entails personal suffering.

So, when a pizza shop owner declines to cater a gay wedding, she is not saying, nose arrogantly in the air, “My kind wants nothing to do with your kind. I am a sinless person and God loves me and would never wish me to consort with people like you.” This couldn’t be further from the case. Sure, there are many bigots who would say exactly this, but these people are not representative of Christianity’s true spirit.

It’s quite likely that the pizza shop owner would personally be quite willing and happy to cater a wedding for a same-sex couple. Everyone likes to celebrate the happiness of others, particularly if those others are people they care about. But what makes situations like this different for a person of faith is that it’s not ultimately about what the individuals feels about things, but what their faith dictates.

Christians believe that the universe was created by God and that his design is something that is intelligible both through interaction with the natural world and by divine revelation. We believe that there are certain ends for which man was designed that are not subject to subjective interpretation or modification (however much we might wish them to be), and we strive to align our whole selves to these ends with Jesus Christ as our example. We know, because of the same revelation experienced by St. Dismas on his cross, that humanity is fallen, that we see through a glass darkly, that we cannot be trusted to know what is best for us and that we need Christ to make us whole again.

It’s not a mistake to detect, then, a note of apology in the voice of the pizza shop owner when she declines the catering request, as in “I’m sorry, but I can’t. I wish I could but I just can’t.” This may not make the same-sex couple feel any better, but it might at least help them understand.

Of course I’m only speculating about the inner dialog of the Indiana pizza shop owner, imagining how I might feel if I was put in such a position. The point is to illustrate that the religious liberty issue is much more than a sham excuse to condone bigotry. It’s a constitutional principle that is meant to protect an individual’s right to act according to their religious conscience.

For a person of no religious faith this may be difficult to appreciate, but Christians are bound to a reality and a truth that is much bigger than their own opinions or their own feelings. For the Christian, the “fool’s paradise and utter illusion” referenced by C.S. Lewis is not a viable option, as attractive as it often appears. “I didn’t go to religion to make me happy,” Lewis famously confessed. “I always knew a bottle of Port would do that. If you want a religion to make you feel really comfortable, I certainly don’t recommend Christianity.”

At any other time in history, it’s quite likely that the average Christian could live his entire life without having to publicly articulate his views on homosexuality. He could live peaceably with his neighbors, be they gay or straight. He could work a job, practice his faith, and raise his children in that faith without ever feeling pressured to participate in the culture wars. He could make his voice heard at the ballot box, like most Americans.

We live in a cultural moment, however, where Christians are being singled out by a highly sophisticated ideological campaign with the express motive of marginalizing them and ultimately eradicating them from public life. So we must speak up when called upon and defend ourselves for the sake of our faith, for the sake of our children, and for the sake of the American tradition of religious liberty. It will not be comfortable, but it is the right thing to do.