Trending Now
You are at:Home»Featured»Appeal from Syria’s Catholic Leader Ahead of Geneva Peace Conference
By ACN-USA News on January 20, 2014 Featured, International Issues, Those in Need 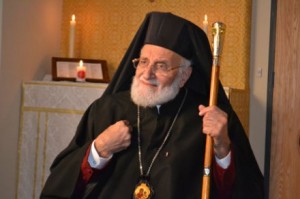 Gregorios III of Antioch, President of the Assembly of Catholic Hierarchs (Bishops) in Syria (© ACN)

The leader of Catholics in Syria has issued an urgent appeal to the faithful in Syria, and people throughout the world, to pray for the success of this week’s Geneva II peace conference to be held in Montreux, Switzerland.

Damascus-based Melkite Greek Catholic Patriarch Gregorios III has called on every Syrian Catholic, whatever their circumstances, to pray for an end to the hostilities that have prompted almost 9 million Syrians to flee their homes since the conflict began almost three years ago.

Writing in his capacity as President of the Assembly of Catholic Hierarchs (bishops) in Syria, the leader of the world’s Melkite Greek Catholics issued a statement yesterday calling for the prayers from “my beloved bishops, all our children, priests, monks, nuns, faithful, confraternities, youth movements, families and young people.”

In his statement, he goes on to appeal to the West to join him and his community in praying for peace,  “Let there be a global prayer campaign for peace in Syria, the Holy Land, the Arab world and the whole world.”

In the document, a copy of which was sent to Catholic charity Aid to the Church in Need (ACN), Patriarch Gregorios states: “We implore [God] to hear our prayers, respond to our cries of distress and the suffering of the victims, and grant us the gift of peace.”

Patriarch Gregorios’ appeal for an end to the violence comes as latest UN statistics show that nearly two-fifths (40 percent) of the country’s 22.5 million pre-war population have now fled their homes, with 2.3 million living as refugees abroad and a further 6.5 million displaced within the country; more than 115,000 people, most civilians, have died in the fighting so far.

Addressing the mounting humanitarian crisis, made worse by one of the worst winters on record, the Geneva II Middle East Conference is expected to bring together representatives of Syria’s Assad regime and the opposition in a bid to end the country’s civil war and pave the way for a transitional government.

Initially scheduled for May 2013, the much-delayed conference is due to start on Jan. 22, 2014 and involve up to 30 other countries. These include the US, the UK, France and Germany, as well as Middle East countries such as Saudi Arabia.

The role of Iran is not clearly defined, but the country has not been invited as a direct participant in the talks.

No religious leaders from any of the participating countries have been invited, even though Christians have suffered in particular at the hands of jihadist rebels fighting the Syrian regime.

In his appeal, Patriarch Gregorios, who is noted for his peace advocacy work, writes: “We beg [God] to inspire the countries and their representatives who are about to meet with the wherewithal for peace, security and a better future for Syrians.”

In a separate document released alongside his peace appeal statement, Patriarch Gregorios stresses the need for unity among the international community in calling for peace and a halt to the influx of weapons to armed groups in Syria.

Highlighting his hopes for a widespread take-up of his appeal for prayer, he states: “We long and pray for the peace to be Syrian though we are grateful to all those countries who are working for that Syrian peace.

“The [international community’s]efforts should be concentrated on obtaining a peace that is really Syrian, for that would be true peace and the best and most suitable for all parties to the conflict and for all Syria.”

Patriarch Gregorios has repeatedly praised Pope Francis for his September 2013 prayer vigil for Syria.
At the time, the initiative was hailed as a turning-point in the bid to prevent a sudden escalation of conflict in the region with the possibility of direct Western military intervention.

The Patriarch also congratulated Pope Francis’ address to the Diplomatic Corps accredited to the Holy See on Jan. 13, 2014, when the Pontiff highlighted his hopes for the success of Geneva II.
Pope Francis said that day: “It is unacceptable that unarmed civilians, especially children, become targets. I also encourage all parties to promote and ensure in every way possible the provision of urgently-needed aid…”