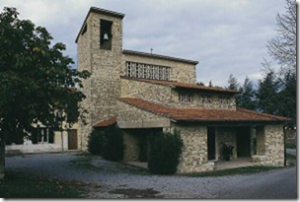 Church of Sts. Peter and James

Since the last installment, a gentleman who read these articles made the following observation about architecture. He said there are two “courts.” One that is ‘modern’ and the other that is ‘historical.’ He justified having a preference by saying “beauty is in the eye of the beholder.” He also made the point that there are elitists in both camps that speak to only a select few by choosing to use stylistic design elements that only a few are familiar with.

His comment about elitists introduces the idea that there are moral implications.  It points out the necessity to use the vernacular as using design elements that only speak to the select few means many are ‘left out’. An architect who mimics a style or architectural language from the 1930’s or 1530’s, that requires specific knowledge in order for it to be ‘decoded’, is an elitist, as he said; a snob (sin nobilta).

The statement, “beauty is in the eye of the beholder”, dismisses the moral implication with respect to architecture that is designed to communicate to the select few.  It reduces architecture to a visual art.

This is not the case. Even the blind experience architecture.  And there is a great deal they experience without vision. They focus on the transcendent aspects of architecture because it is far more difficult, if not impossible for them to objectify a building. The “beauty is in the eye of the beholder” maxim only refers to the external aesthetics. It completely ignores interior beauty (e.g. structural integrity, etc.). With respect to architecture, this obviously is not referring to “interior design”, but the capacity for a series of spaces to facilitate certain human, including spiritual, experiences.

I have apparently failed in clarifying that architecture is not about either “court.” Architecture is not about buildings as objects, defined by stylistic preferences. This is the Second-Hand Heresy that has lead to reducing architecture to “oggettistica.” Oggettistica is also an art form. Objects, ornaments, are designed and created purely for their aesthetic qualities and appreciated according to an individual’s particular taste. As objectifying the human body is grave sin, to objectify a building is to eliminate the spiritual implications altogether. And buildings have spiritual implications; all buildings, not just churches. It is the quality and characteristics of the space itself that can deeply effect the human experience within a building and which can transcend all implications of ‘styles.’

Neo-neo classicists have chosen to live in that false “traditional court” … perpetually. These “traditionalists” ridicule true masters, such as Frank Lloyd Wright and Aalvar Aalto; men whose work was free of the slavery to style, which can condition every aspect of architectural form. Frank Lloyd Wright’s contribution to the profession is perhaps only matched by Brunelleschi. He understood the moral implications of defining space in the terms he did, whether or not he viewed it as representative of Divine Economy or not. He did far more with far less than architects who waste vast amounts of money, materials and space, to communicate an abstract thought regarding their conception of beauty; based upon rules that in many instances do no more than to reinforce the false notion that beauty cannot involve anything that is not aesthetically pleasing. Mother Teresa was not “aesthetically pleasing”. Jesus on the Cross was not aesthetically pleasing.

Wright did more to liberate people from living within the confines of ‘boxes’ than anyone in history.  In God’s creation, there are none of these artificial barriers that divide us and which in some instances lead to forms of segregation. Through an understanding of how space exists in nature, Wright was able to design 1200 square foot homes that felt like 2400 square foot homes. And unless you have really deep pockets, and money to waste, it is not hard to appreciate what an extraordinary accomplishment this really is.

Parishioners today only have a great deal in common with parishioners 500 years ago in the abstract. Parishioners in one parish often have little in common with parishioners in another parish in the same town. So how can an archetypal form be promulgated with any seriousness? Only in the abstract. And this probably explains why those who have a fascination with the works of the neo-neo-classicists, including many religious, are intellectuals who reside to a large extent in their heads, “and slightly to one side”, as Professor Ken Robinson put it in his now world famous TED TALK (http://www.youtube.com/watch?v=iG9CE55wbtY ). Should it come as any surprise that he describes this form of intellectualism and education as the reason for destroying creativity in schools? When you have time, watch Professor Robinson’s talk … I’ve yet to meet someone who didn’t enjoy it.

In reality, people today live an existence that is so different from the existence of 500 years ago that to ignore the differences is immoral. This brings us back to what the architecture is really all about, but which most do not understand because of the Second-Hand Heresy that has affected us all. It is worth repeating it somewhat from a different perspective. Fr. Tom Collins, whose blog can be found at http://countrypriest.livejournal.com, said the following with respect to architecture:

The “second-hand heresy” that needs to be overcome is the
obsessive-compulsive desire to impress the worshipers, rather
than inspire them to aspire to participate more fully in the
sacred mysteries made efficaciously present in the sanctuary.
Authentic worship is not a product of manipulation, but the fruit
of reverent communion with the transcendent and transformative
love of God …”

In short, what the “Country Priest” is saying is that it is possible to take a position which reflects heresy simply because our formation is so lacking or so flawed, usually through no fault of our own, that we are no longer aware of the error at the root of our thinking; most everyone’s thinking. And here is another way of looking at the “second hand heresy”. The aesthetic aspects of a building are as important as the ‘good looks’ we received from our birth. Clearly it is no architect’s goal (or it shouldn’t be) to intentionally design an ugly building; or more appropriately expressed, a repulsive building. From the outside, every church should make one feel welcome. But the thought that a facade should be designed based upon abstract notions of aesthetics, unique to a given culture or period in history, feeds this “obsessive-compulsive desire to impress the worshipers.”

As we all know, sometimes the best way to communicate an important point is by example. A slave knows when they are liberated. As anyone following these articles will have understood, I have a great deal of respect for Giovanni Michelucci because his little book (La Felicita’ dell’architetto), and subsequent conversations with him, liberated me from the slavery to form and style which has the over-riding motivation and goal to “impress.” Being liberated can be scary. That’s why many slaves preferred to remain on plantations after being liberated, for fear of facing the unknown. It’s why many convicts either commit suicide (e.g. remember Brooks in Shawshank Redemption?), or choose to commit another crime in order to get back to what they know and feel comfortable with.

It is important to be open to making mistakes. If you watched the video by Professor Robinson, you will remember his stating that the educational system has so stigmatized “being wrong” that it has paralyzed creative thinking. So adults, often through too much “education”, seek a position where they are never wrong (http://tinyurl.com/kcg59gq out of fear of making a mistake.The point he makes is very profound. It is the explanation of why neo-neo classicists never make mistakes and why their work lacks any real creativity. How can one ever be wrong (so they believe) copying great works from the past? 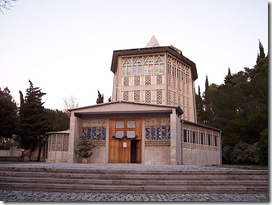 Giovanni Michelucci designed many churches. I would like to speak about two of them. He later considered them both mistakes. The first Church is the Church in Lardarello.  While his own commentary expressed an understanding of the importance of facilitating worship and situating the structure appropriately in the urban context, he later came to the realization that in effect, he had designed the Church to “impress.” He realized that he, too, was not yet free of treating the building as an object. He stated as much. It became the cause for serious depression, where he considered quitting architecture all together. That’s serious. When a slave is set free, it is still very hard to change behavior. It usually takes years.

The other church is a small country church (i.e. Church of Sts. Peter & James).  The forms and elements … materials … are all indigenous. The design reflects the lives of those who lived there and who would attend this church; people used to simple and humble surroundings. He reflected this same spirit in the design of this church.  Years later he considered this a big mistake for an entirely different reason than treating the building as an object.  These poor people didn’t need to be reminded of their poverty.  They lived it all week long. They didn’t need to be “humbled” on Sunday. He said that if he had it to do all over again that he would have designed soft benches and kneelers along with a much richer environment. These parishioners needed to experience God’s abundance.

What this all comes down to is this … Listening. Listening to the needs, hopes, aspirations, desires of the specific people who will use that particular building.  To impose almost any architectural style, especially the older archetypical forms, all but ignore these considerations.  And as Michelucci said himself “chi non capisce l’uomo, non capisce niente.” … He who doesn’t understand man, understand nothing.