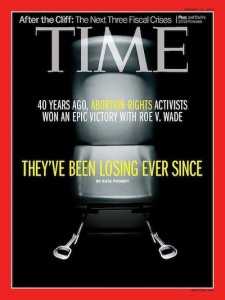 How’s this for a lead to “Has The Fight For Abortion Rights Been Lost?” by Kate Pickert?  She writes:

“In January 1973, the Supreme Court made access to abortion a federally protected right. As I write in this week’s TIME cover story, that seemingly decisive victory 40 years ago kicked off a war that the pro-choice movement has been losing ever since. In many parts of the country today, obtaining an abortion is more difficult than at any point since the 1970s.”

The litany of “woe” is a familiar one, but it always helps to remind us why—the re-election of Barack Obama not withstanding—the tide is moving in the direction of life. Picket enumerates (and mischaracterizes in some cases)

But why, or, better, how? There are several “positive” explanations—for example, that the Movement, led by National Right to Life, “has pursued an organized and well-executed strategy.” Almost all of the gains mentioned above are the product of NRLC state affiliates working in conjunction with NRLC’s Department of State Legislation.

And because of this carefully honed incremental strategy, pro-lifers have been able to take advantage of the impact of prenatal ultrasound and advanced neonatology which helps Americans to “understand what a fetus looks like and that babies born as early as 24 weeks can now survive,” Pickert writes.

Likewise, “Although three-quarters of Americans believe abortion should be legal in some or all cases, most support state laws regulating the procedure and fewer and fewer are identifying themselves as ‘pro-choice’ in public opinion surveys.”

This is one of those points that need clarification. A much clearer and more honest explanation of almost all recent polling data is that a majority of Americans oppose the reasons that over 90% of all abortions are performed.

The two-fold “negative” explanation, if you will, for pro-life advances, according to Pickert, is, first, “The prochoice establishment has also been hampered by a generational divide within the cause. Young abortion rights activists today complain that the leaders of feminist organizations, who were in their 20s and 30s when Roe was decided, aren’t eager to pass the torch to a new generation whose activism is more nimble and Internet-based.” Second, a familiar refrain from pro-abortionists is that “the most pressing challenge for prochoice activists may simply be that abortion is legal. In a dynamic democracy like America, defending the status quo is always harder than fighting to change it.”

That is true, of course, but it masks the larger and more significant point: the “status quo” is not a reflection of where the country was or is. It is the legacy of a judiciary run amuck.

Moreover that status quo is (by Pickert’s own reading) changing. The public never endorsed essentially abortion on demand which is why pro-lifers have been able to gradually hedge in the unlimited “right” to abortion.

One other very important point, made in a separate article written by Emily Buchanan. Feminism, properly understood, has always opposed abortion, going back to the founding mothers such as Susan B. Anthony and Elizabeth Cady Stanton.

It was the pro-abortion militants of  the 1960s and 1970s that high-jacked feminism. “So the pro-life movement hasn’t changed the meaning of feminism, as has been suggested,” Buchanan wrote. “It was the neo-feminists of the 1960s and ’70s who asked women to prize abortion as the pathway to equality.”