Trending Now
You are at:Home»Learn & Live the Faith»Apologetics»Aristotle and Manna
By Mary Kochan on September 4, 2013 Apologetics, Featured, Live in Christ, MyChurchParish.com 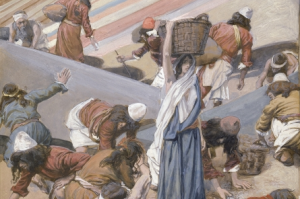 To feed the Israelites during their wandering time in the desert, the Lord caused to appear on the ground a flaky substance that tasted like pancakes with honey. At its first appearance, the people quite sensibly asked what everyone asks upon seeing something new, “What is it?”  And that very question became their name for it, “Manna.” The entire time of their sojourn they ate this question for breakfast, lunch, and dinner: “What is it?”

A thousand or so years later, an ancient Greek philosopher, giving careful consideration to how it is that we answer the question of what something is, came up with the idea that we know for sure what something is when we can identify its four causes.

Second, there is the material cause, what the thing is made of, that upon which the efficient cause works to bring about the transformation into the thing. A table is made of wood; a horse is made of organic matter; a sculpture of marble; a shoe of leather and so forth.

Next there is the formal cause. It is what guides the development or creation of the thing. For the horse it is the imposition upon the organic matter of the form of the breed of horse that it is. The table exists as an idea in the mind of the craftsman, who then works his idea upon a material, such as wood or metal, to form it into a table. The form of the sculpture is in the mind of the artist.

But of all the causes, the most interesting one is the last one. The telos, the end or purpose of the thing, for it is the telos that directs the entire creation of the thing, unifying the act of bringing it into being at the beginning with the final finished object. Without a telos, the maker of the table would never know when he had a table ready for its intended use; the sculptor would chisel the marble into smithereens, never knowing what the completed sculpture was supposed to be; we could never identify the full-grown horse as the same individual that he was as a yearling or as a newborn colt or as an embryo.

But perhaps we should not make quite such an extravagant claim for the telos without a bit more evidence.

Say for example you came upon a man who to all appearances was making a table. You see upon your arrival a rectangular wooden plank, to which he is in the process of attaching what quite clearly looks to be a fourth leg at one corner, three other legs of equal length sticking straight up at the other corners. “Ah”, you say to him, “I see that you are making a table.” “Not at all”, he replies. “What you are taking here for the top of the table, lying upside down, is actually the bottom of what I am making. I have another piece of wood just like this one that I am going to put on top of these four posts at the corners and then I am going to surround these posts with wire and put a little door right on this side, because, Sir, this is not a table at all, but a cage for my rabbits.”

We see that there could be a time in the making of one thing that it looks like another thing, but only the telos reveals the limits of that appearance, so we must seek the purpose, the end, to know what it really is.

But give us at last a real table, finished and functioning as a table. And observe that someone has placed upon it a small glass object, a paperweight. You’ve seen the kind, with the pretty swirls inside. Quick, here is a pop quiz: What is its efficient cause? A glassblower, you answer. And how right you are.

Well now, what is its material cause? Oh, that is so easy. Glass, of course. And its formal cause? Again, that is easy. The idea or design of a decorative paperweight.

Now, wait just a minute. Here is the man who made it. And listen to what he is saying: “What you are taking here to be an ordinary paperweight is actually a very clever weapon. Hidden within this thing is enough explosive to blow a hole in the roof and it can be detonated with a simple remote control device, such as I am holding in my hand.”

We will make our exit, thank you; no demonstration required. But see, here in this room is another paperweight, looking very much like the one we just left. We will give its maker just a moment to convince us we are in no danger: “What you see here, that looks like an ordinary paperweight, is no such thing. I am a sculptor and I am creating a massive sculpture of a beautiful woman. This thing you take for a glass paperweight is actually to be the iris of her eye. See how much like an eye it looks if I place this black spot over the center?” Quite relieved, we agree.

The Question Has an Answer

Notice that the telos, the end, the purpose, required a source of knowledge other than the object itself. It required a revelation from the maker of the thing and the revelation came as a story, the story of the making of the thing. Only the story of its making let us know if the thing as we saw it was finished or not, or had something hidden within it, or was part of a larger plan with a meaning beyond itself.

And that is why the question “manna” had to wait so long for an answer. No, not just waiting for Aristotle, but waiting for Christ. God’s provision for them was a question: “Your fathers ate the manna (‘what is it?’) in the wilderness.” But now the answer has come: “I am the living bread.” Christ answers the question of what manna is. It has its meaning, its telos, in the story God tells us — the story of Creation and Redemption.

And this is true of everything and everyone, including you. Only your Maker can tell the story that can reveal what is in you, what your place is in all the grand work of His creation, what you will be when He is finished with you. Jesus is your answer, too.

Four causes. The most interesting one is the telos.