Trending Now
You are at:Home»Columnists»As an Athlete Running the Race
By Msgr. Richard Soseman on March 6, 2012 Columnists, Featured 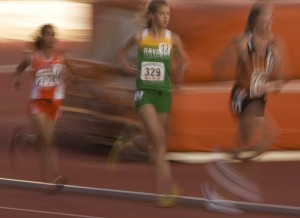 Jesse Owens was one of the fastest human beings who ever lived. Known as the Buckeye Bullet, he became famous at Ohio State in 1935 when, in the span of just 45 minutes at a Big 10 track meet, he broke three world records and tied a fourth. As a member of the U.S. Olympics team that competed in the 1936 Berlin Olympics, he won gold medals in the 100m, 200m, Long Jump, and the 4×100 relay. As an African American, he put the lie to the Nazi’s propaganda machine.

When Jesse first began to race, his coach noticed that Jesse constantly watched those around him, obsessing over his competitors instead of worrying about himself. Sometimes he would even stare his opponents down, rather than trying to run them down. His coach knew that this was holding him back.

Eventually, his coach told him that he should run the race by looking inside and challenging himself.  To emphasize this, legend has it that his coach took Jesse to a horse race.  “What did you see on the winning horse’s face?” his coach asked him after the race was over. “Nothing,” Jesse replied. After that, he seemed to run effortlessly.  Once he learned to stop worrying about the attitudes of those around him, Jesse began to win races in historic fashion.

As people of faith, we are often challenged by our friends and family. We look to them for acceptance, but find disapproval:  we are told we go to Mass too often. We pray too much. We need to loosen up and join our friends in doing something we consider sinful. We are told we need to go to a wedding of a Catholic outside the Church, that we should be quiet about our faith and not bring it up in family discussions.   As people of faith, we find joy in doing the right thing, in cultivating our relationship with our Lord, but we can also expect approval from others.  This approval often will not be given, for other people, even those of great faith, have learned to get along in other ways.  Many are living their faith extremely quietly.  Still others live lives which are not faithful, but in their hearts they know the truth of the faith, and they cannot stand our actions, for this makes them uncomfortable with the way they are living.   This discomfort quickly becomes aggressiveness toward us.

While it is true that some people wear their faith on their sleeves, most of us want to coexist peacefully, living our faith in our own lives, while letting others live theirs. We do want to give good examples, though, and occasionally the good word to help others.  Like the runner who wants to win the race, we need to avoid worrying too much about the attitudes of others; instead, we need to dedicate ourselves to faithfulness and grow in our relationship with the Lord. We need to steel ourselves against the unjust criticisms of others and live our faith in the way we know is right for us.

Another figure related to the Olympic victory of Jesse Owens was his teammate, Ralph Metcalf.  An African-American Catholic from Atlanta, Ralph excelled at Marquette University, winning the title of the world’s fastest human from 1932 to 1934, dominating during his four NCAA seasons, and winning medals at both the 1932 Los Angeles Olympics and the 1936 Berlin Olympics.  Jesse Owens’ fourth medal at the Berlin Olympics was in the 4×100 relay, in which four runners of one team run in succession, passing the baton as each finishes his leg of the race.  Jesse Owens and Ralph Metcalfe competed together, along with Foy Draper and Frank Wykoff, to take the Gold Medal in the event.  While Jesse Owens’ accomplishment was significant, his fourth Gold Medal would have been impossible without his teammates.

As people of faith, we often compete alone, trying to live lives of faith without reference to others. We can never forget the Church, however, and the “teammates” the Lord provides for us.  We should take advantage of opportunities for “team spirit” provided by our parish, by study groups, by membership in the many guilds, pious societies, and supports to our faith which all parishes provide.  Today we may even find supports to our faith via the Internet, ensuring that our internet “friends” can help us with the solid stuff of faith, and not betray us by leading us down the primrose path. We want to win the race at the end; we want to triumph in our lives of faith by preparing for heaven at all times.  The best way to be ready, just like those relay runners depending on each other, is to rely upon the supports to our faith which these pious groups and associations offer.