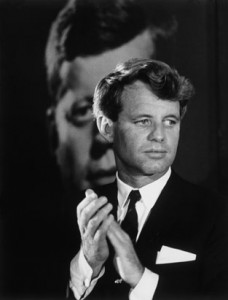 In a thousand days of JFK,
Hope held sway for a better way.
To the noble we did aspire.
What was keen and bold we did admire.

Jackie helped us look for class,
Rise above the crass and brass.
In Spanish and French, for Jack she spoke,
To grace and poise she inspired plain folk.

Naught did we dream, little think or say,
How soon Camelot would pass away.
When we looked to Bobby five years later,
‘Twas hard to say who was the greater.

Something like his brother’s were his ways,
His rise like a blaze through inky haze.
Like Gaius Gracchus in his time,
With Tiberius’ torch – bright, sublime.

Memory of the Gracchi brothers will never cease,
Nor Agis and Cleomones of ancient Greece.
Like John and Bob killed by assassins’ blow,
They dared to defy, go against the flow.

Losing such leaders, so matchless and rare,
Some Americans gave way to despair.
Yet memory of two courageous profiles,
Will strengthen resolve for future trials.