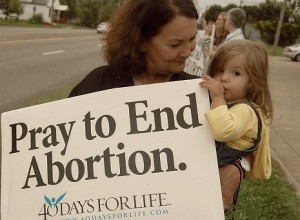 Today, we take time now to look back at the blessings God has provided during the 40 Days for Life campaign that just ended. But just as importantly, we also look to the future.

For this campaign, we have received reports of 772 babies spared from abortion — that we know of!

Many of the local campaigns are still compiling reports, so it’s highly likely that this number will increase as the national team receives more of their updates.

Cyndy had the opportunity to talk with a couple on the sidewalk outside the abortion center in Reno. The wife had been told that she needed an abortion because she and the child could die if she continued the pregnancy.

“Cyndy gave them our resource list,” said Carol Marie in Reno, “and thank God, they used it.” They were referred to the emergency room. “The following day, rather than returning to the abortion site, they visited the local pregnancy center for life-affirming help,” Carol Marie said. “Praise God!”

Abortion is not legal in Ireland – but there are agencies that encourage women to travel to England to abort their babies.

Carolyn in Dublin says the vigil “is so far successful, thank God.” They are able to refer women for pro-life assistance – and away from abortion. “We have confirmation of one baby saved,” she said, “and we are in regular contact with the couple.”

As Rich was praying at the 40 Days for Life vigil in Poughkeepsie, he noticed a red SUV enter the Planned Parenthood parking lot. One of the volunteers walked over to talk and to offer some information, which the driver accepted.

The car then parked close to the entrance, and the prayer team could see it was a mother and her two teenage daughters. After a while, Rich said, “The mother came over to us and told us that her daughter was NOT going to have the abortion. She was very strong on that.”

Mary in Little Rock says a couple from Memphis came for an abortion on the advice of four doctors who all said the baby would die and possibly the mother.

The volunteers told them there were other options to consider. The woman was referred to a pro-life OB/GYN who specializes in high-risk pregnancies. “Against all odds,” Mary said, “their baby continues to live. She is 7 months along … we are praying for a miracle.”

God has granted many miracles in this campaign. We can always join in praying for one more!

There’s no way I can really express the appreciation I have for everything you’ve done during this campaign — your prayers, your participation, your persistence. You provide tremendous HOPE for our future!